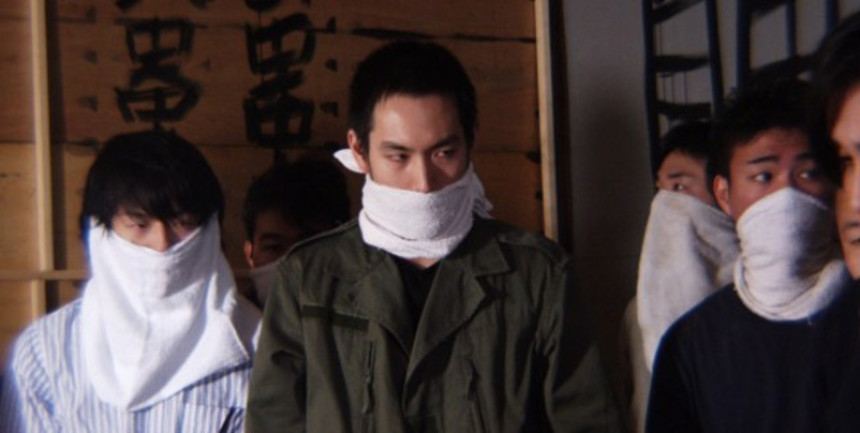 [United Red Army begins a one-week engagement at the IFC Center in New York today. This review originally appeared in conjunction with the film's North American Premiere at the New York Asian Film Festival in July 2008.]

The dates, facts, and figures come flying out of the introductory section of United Red Army like a machine gun, accompanied by a hypnotic musical theme, shooting down any possible suspicion that director Kôji Wakamatsu intended to make an audience-friendly film about the Japanese student movement of the late 60s and early 70s.

Indeed, the tone is so strident that you feel guilty for not taking notes, as though a class were being taught and you were not properly prepared to answer questions asked by the deep-voiced narrator. Initially fascinating, the tone and pace becomes off-putting, frustrating, and finally wearisome. Suddenly, though, you notice that Wakamatsu has been sneaking in brief dramatizations of the student movement's evolution that have grown longer each time they break up the narrated documentary footage. Almost before you realize it, you're caught up in a brutally gripping dilemma facing sincere individuals.

In short, you face the same situation as the real-life characters depicted in the film.

By the point of immersion, we're trapped in an isolated mountain cabin in the dead of winter, trying to withstand the shouting screaming fury of the leaders of the United Red Army, formed from two separate militant groups with the common goal in mind of "Revolution!"

Round after round we go, with one young person after another failing to live up to the ideal and facing elimination at the hands of their fellow former comrades.

It spoils none of the movie's power to say that it concludes with a lengthy reenactment of the last few surviving members of the group holed up in a mountain lodge, holding the hapless female proprietor hostage as the police attempt to bring a peaceful resolution to the stand-off. It's all told from within the lodge, and feels just as claustrophobic and tense as the seemingly endless rounds of attempted "self-criticism" in the isolated cabin.

The festival program notes say that Wakamatsu "knew many of the members of the Red Army factions, some of whom fled to North Korea, some of whom went to Palestine and some of whom are in the US (a Red Army member was arrested carrying bomb-making materials on the New Jersey turnpike in 1988)" and that the director based the film "on extensive research, interviews with surviving and jailed Red Army faction members and his own memories and friendships."