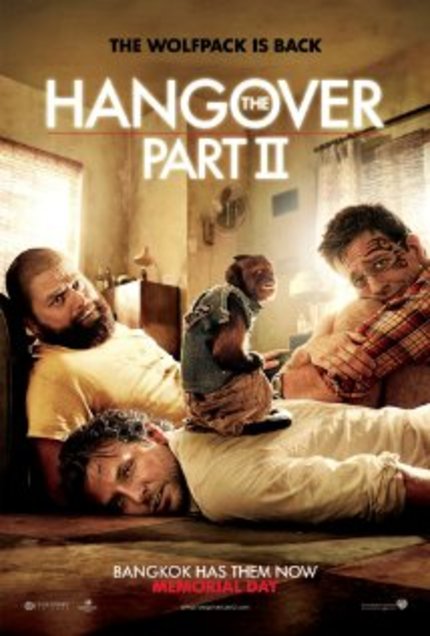 Years ago, while visiting a local wolf sanctuary, I noticed how the captive wolves tended to do nothing but meticulously pace their pen, the exact same path, the exact same way, over and over again. Maybe the first time the wolves walked this path, it was so new and fresh, so memorable and nifty, that they couldn't help but do it again. Exactly the same way. And then again. And again. Maybe for them, there is some odd comfort in this repetition (who knows the mind of a wild animal), but for the outside observer, one can't help but think that these once-feared wild and unpredictable beasts have become quickly dull and non-threatening. Such is the way not only for rescued endangered wolves, but also for "The Hangover"'s wolfpack - the key difference being that it is a pack that has been in no danger of extinction - that is, until they ironically opted to cage themselves.

The first teaser for "The Hangover Part II" consisted of little but the three leading men, Bradley Cooper, Ed Helms, and Zack Galifianakis, walking in slow motion through Bangkok. Perhaps you were as taken aback by this as I was - a comedy film teaser with no laughs. Zero. Sure, its real purpose was to simply inform general audiences that these popular characters would be returning this summer. But to completely stake the entire teaser on assumed lingering good will from the original film, and not offer even a chuckle... not only is that risky, it's downright audacious. And in this case, it's stupid. I took it as an early warning that "The Hangover Part II" may have very little to offer that we haven't seen before (if even that much). What can I say, the teaser didn't lie.

I consider the original "Hangover" film one of the best comedies of the last five years. It's recipe for laughs was ingeniously simple: A pack of friends - later dubbed "the wolfpack", consisting of a few young professionals and their maladjusted associate (Galifianakis) - go to Vegas for a bachelor party, but get far more than they bargained for. They wake up in their hotel room with a chicken, a tiger, a baby and no memory of the night before. The entire film from that point is them backtracking, trying desperately to put the pieces together, to solve the mystery of what the #$%& happened. And as absurd as every reveal, every twist and turn is, it's all plausible because they're in freakin' Las Vegas.

Now imagine the same characters going through the same thing again, only this time in Thailand, and caught up in some sort of crime plot. I'm not exaggerating about it being the same thing - this is maybe the single biggest, laziest and most blatant plot recycling I've seen since "Die Hard 2". Admittedly, there is a disconnect for me (a Midwestern American) when it comes to Bangkok versus Vegas, but even if knew more about Thailand, there's nonetheless a latent insult in the fabric of the film that Bangkok is nothing but a more exotic and more dangerous version of Las Vegas.

This time, the production seems to have a lot more money to throw around for things like speedboats and car chases and Billy Joel songs. Whatever creative energy (if that's what we're going to call it) was spent on this film was clearly channeled into how to raise the shock ante rather than how to increase the comedy. And even that failed. The precious shocks that are supposed to pass for crowd-pleasing gaspers are nothing that we haven't seen before in other recent raunchy comedies. Animals in peril, doing crass things. Bodily humor and drug-fueled shenanigans. And of course that new classic, that guaranteed audience re-action: showing some dude's penis. None of this adds up to anything nearly resembling funny.

Of the three leads, Ed Helms comes closest to saving the most scenes. Galifianakis gets a laugh or two up front, but his shtick as this character is already worn, and he seems to know it. Bradley Cooper is all but completely ineffectual in his role this time around, looking very much in over his head - not a result of the character's situation, but because of the overblown, undercooked production itself. He's right to be concerned. It really is as though co-writer/director Todd Phillips and his screenwriters took the screenplay from the first "Hangover" and ran a find/change, switching "Las Vegas" to "Bangkok, Thailand", and then hastily adding Paul Giamatti as a crime boss. Even the structure remains, as the film opens with another flash-forward phone call by Cooper, reporting how screwy everything's gotten for them.

All of this is supposed to be a lot of fun. It's not fun. It's nothing but a tedious and pointless rehash that was better left alone. "The Hangover Part II" is the kind of sequel that, upon seeing it, ultimately makes you work to maintain the same level of love for the original that you once had. It diminishes its perfectly good predecessor for a pointless, glossy cash-grab. The film is long and dull, predictable and familiar. By making this sequel, the wolfpack may've been attempting to preserve their legacy, but instead they've only put themselves on a path of terminal repetition. In the end, the biggest hangover belongs to the audience - a "Hangover Part II" hangover.