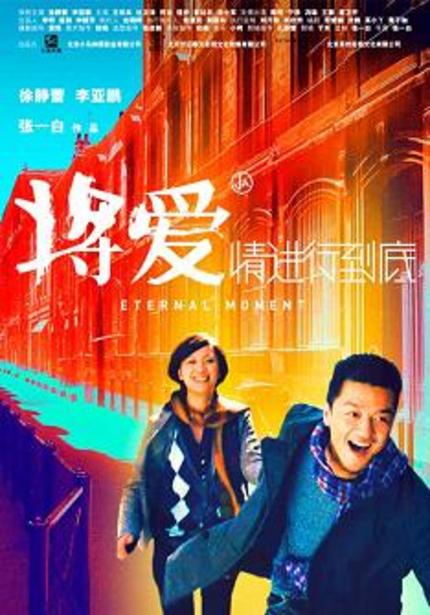 It's not really much of a surprise to find Zhang Yibai's Eternal Moment is very good indeed. Yes, it's a slick romance pitched as a piece of high-end fanservice for followers of a TV soap opera more than two decades old, but that show - Cherish Our Love Forever - was where the director got his big break. Zhang's trademark has long since been his ability to mine subtle, genuinely moving emotion out of even the broadest dramatic gestures, whether from his arthouse projects (Spring Subway, Lost Indulgence) or his commercial work (the flawed gem The Longest Night In Shanghai). Eternal Moment is a glossy, populist production, no question, with a fair few chest-beating moments but it's also a great deal quieter, more artistic and wistful than you might expect, able to stand up with some of the best of mainland Chinese cinema over the past decade.

Casting most of the original leads (many of whom also began their careers on Cherish Our Love...) ostensibly the plot follows the lead couple, Wen Hui (Xu Jinglei, Go Lala Go!, Shinjuku Incident, The Warlords) and Yang Zheng (mainland TV star Li Yapeng) many years after the show's wrapped up. This is more than just a cursory happy ever after, though. The film is actually split into three separate vignettes, with apparently nothing to link them bar the same characters. First the pair are married and successful, but Yang suspects familiarity's bred more than contempt when he walks out on Wen Hui and she doesn't seem to notice he's gone. Then they're down-at-heel, long since parted, dragged to a class reunion and left to wonder if they could get back together. Finally they're wealthy again, yet separate, with Yang flying half way round the world to help Wen Hui when she's forced to confront the sorry state of her marriage.

Given the basic premise, then, it's a surprise just how downbeat Eternal Moment is. The opening segment is deceptively perky, in a sense - easily the happiest of the three, it's also by far the shortest and its enthusiastic CG montages, though gorgeously stylised, make the sudden lurch into cold hard reality in the second and third acts one hell of a sucker punch. Despite frequent flashbacks to the TV show and moments of sly, blackly comic humour, this is not a film to indulge in rose-tinted memories. The idea of an 'eternal moment' feels as much like a wound that never quite heals as a perfect, ever-burning flame. Weirdly, for all the cutaways to real (?) couples reminiscing over the first fumbling steps in their relationship, Eternal Moment seems hell bent on reminding us young love is no guarantee of happiness.

It is very stylised at times - again, especially the occasionally bizarre theatrics of the first story, which could conceivably dissuade people who'd feel far more for the other two. Li Yapeng in particular affects a mildly stilted, masculine detachment which, when coupled with moments like a comedy bullet-time piece that'd have even David E. Kelley wincing, skirts uncomfortably close to parody. But even this is still shot through with weird moments of grace. An early sequence where Yang sprints through a dreamy CG cityscape after Wen Hui's car is an obvious nod to Zhang's background in commercials (not least with the product placement whipping past), but it's far gentler and more captivating than anything Feng Xiaogang would probably have come up with.

And while its subtexts are hardly pearls of wisdom there's still a shocking amount of dramatic weight to be had from a mainstream film saying, to all intents and purposes, that (sometimes) you can't go home again. That no matter how close two people were back then, sometimes life refuses to let them stay together and there's nothing anyone can do about it. That memory can be a liability more than anything else. Xu Jinglei's own films have dabbled with the idea of self-destructive obsession (Letter From An Unknown Woman) and her big moments where she insists 'Look, this is my life now - there's no going back' are hugely effective. Like Masahiro Motoki's lonely makeup artist confronting his estranged wife in The Longest Night In Shanghai, these are well-worn tropes, but Zhang teases out the underlying pain and melancholy rather than just using them to yank on the audience's heartstrings.

Eternal Moment is mainstream cinema, yes, but it's not popcorn. It's got the stamp of a major studio all over it but it's rarely, if ever crude or tacky. It's straightforward, basically asking whether it's really enough for two people to be in love, yet it's never simplistic. Zhang Yibai, his cast and crew could presumably have phoned this in, yet they did anything but. Eternal Moment turns a straightforward idea into a slow burn of quietly riveting pathos evoked by the way that under the broad gestures, the do-you-remembers and if-onlys and all the rest of it, the characters' regrets are gradually, remorselessly laid bare. Taken on one level the finale is the expected sequence where a power ballad kicks in and Yang and Wen Hui act out a stupidly contrived Big Moment yet on another, for a major studio release it's startlingly bleak. Even for someone who's never seen the original television series Eternal Moment is still a riveting watch, further proof Zhang Yibai is one of the most consistently interesting commercial directors in mainland China, and comes strongly recommended.