All bow to Cthulhu's best known prophet so far: THE LIFE AND TIMES OF PAUL THE PSYCHIC OCTOPUS 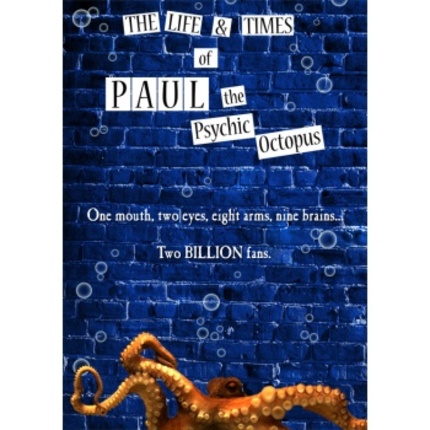 Be afraid. Be very afraid.
Or not, actually!

Cinema Vertige's Alexandre O. Philippe and Robert Muratore recently made the funny and insightful documentary "The People vs. George Lucas" and have now announced their next project. Well, more than announced actually, they even have a trailer for it.
It's another documentary, and their subject this time is Paul, the German octopus in the Sea Life Center in Oberhausen who for years predicted the outcomes of soccer matches with a near-infallible success rate.

Paul rose to fame during the European Championship of 2008 (even though he had the final wrong), but turned absolutely nuclear during the World Championship of 2010. Octopi don't get very old so he died last October, but in his last summer he accurately predicted the German team's only loss in the group stages and their execution by Spain in the semi-finals. In fact, in that tournament every single prediction by Paul (eight in a row) turned out to be correct.

I remember Paul fondly of course: he was the brilliant basis of so many jokes and cartoons. And it's not often you can hear sports-news anchormen ask on television if people will "finally shut up about the f*****g octopus".

The trailer is up at the site for Paul's movie, where he's aptly referred to as the "seer of seers".
Watch the trailer, and have a giggle. And raise a pint to Paul in cephalopod heaven...
Tweet Post Submit