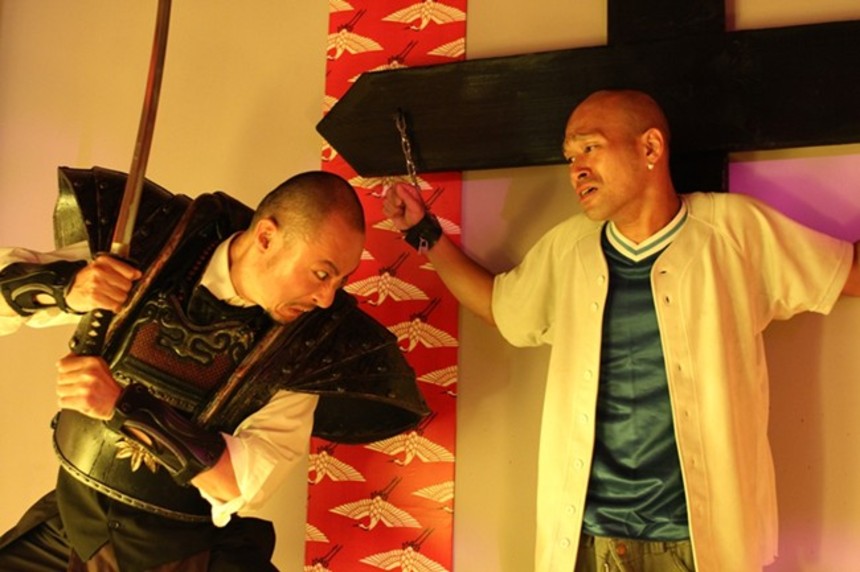 I've known the director of Mutants Girls Squad, Noboru Iguchi, for a very long time ago and we used to making together small independent films. And I wrote a number of scripts for his movies, it's why I've got involved with that project.

The film in Japanese is called "Fashion Hell" with an extra "S" ("Fasshon heru"). And when you transcript it in the Japanese phonetic system, you obtain by adding the extra "S" at the end of the word, the expression "fashion health". And fashion health is the Japanese name for that kind of whorehouses. So the first idea came to this word game with health/hell. And I always wanted to make a parody of the American movie Motel Hell.

Of course, you know, people of my generation, when we were kids, there was a big boom of splatter movies and we were very much influenced by that. If you talk about Japanese exploitation movies these days, you talk about Nishimura, who is a legend in the middle of special effects with his blood fountains. All of Nishimura's films contain blood explosions but the way the blood comes out and what kind of blood comes out differs depending on the project of the movie.

Between two bloody scenes, how long does it take to clean the set?

We try to build up the shooting schedule with a chronological logic to start with clean set which becomes dirtier and dirtier as we shoot to finally end in bloodbath.  We waste a lot of energy between shooting scenes covering the cameras with plastic. Compare to other films, we lose a lot of time like that between scenes.  We try to save time by using tarpaulins and materials that are easy to clean fast.

How did you collaborate with Nishimura for the special effects?

Why did you choose the beautiful Saori Hara for this film?

Yes of course, I was very conscious of the audience outside of Japan. I watched on DVD or video a lot of western exploitation films and I was always envious of the way they make these films and enjoy making of watching it. In Japan you don't have this kind of filmmaking. So I wanted to make a film that anyone would enjoy watching.

Do you feel this content is inappropriate or infringes upon your rights? Click here to report it, or see our DMCA policy.
Jun TsugitaAsamiYûya IshikawaWani KansaiMiyavi MatsunoiComedyHorror