When Pizza Chef Poses As Mafia Don You Get CHEZ GINO 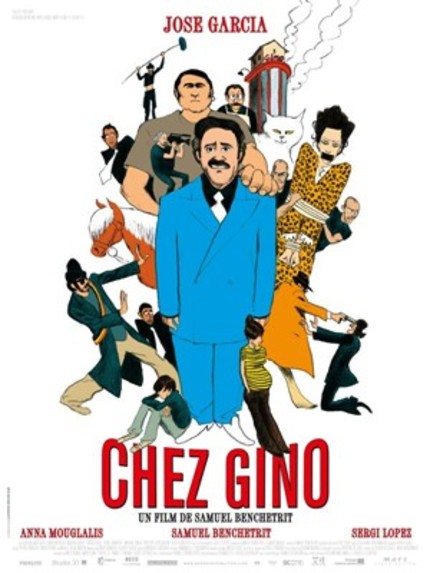 Multi-talented Samuel Benchetrit - he serves as writer, director and actor in his films - won a lot of attention in the pages of ScreenAnarchy a few years back with his debut feature, I Always Wanted To Be A Gangster. It was a slyly funny, stylishly indie-chic bit of work that defied easy categorization, which meant that while I loved it virtually nobody went out to see it, at least not outside of France.

Well, Benchetrit is back and he's up to his old tricks in Chez Gino. His character this time isn't someone who wants to be a gangster, he's someone who needs to be. Though Gino is perfectly happy with his life as a pizza chef he comes from a mafia family and he needs to convince the family back home that he's an active part of the family business. Enter a documentary film crew to construct an elaborate sham.

Benchetrit's first film was a treat on the big screen, a film that works because Benchetrit is one hell of a smart guy and he has faith that his audience shares that trait. Indulging that faith is probably condemning him to the fringes as a cult oddity but I'm very much a part of the Benchetrit cult and I hope I get the chance to see this one as while the style is quite different from his debut the spirit is the same. Check the trailer below.
Tweet Post Submit

Do you feel this content is inappropriate or infringes upon your rights? Click here to report it, or see our DMCA policy.
Samuel BenchetritGábor RassovJosé GarciaAnna MouglalisSergi LópezComedy