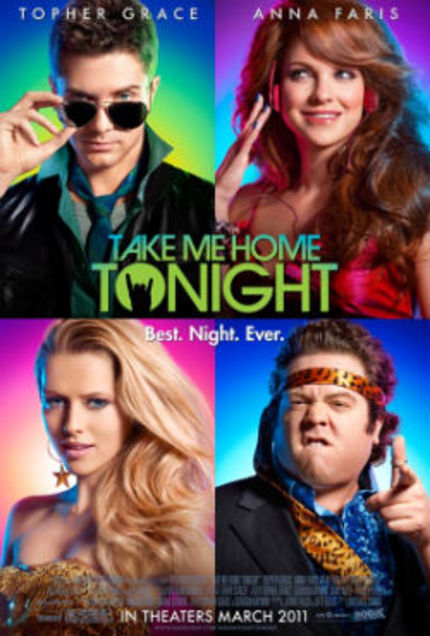 Hey, like, remember the eighties? Welcome to the latest in the current wave of 1980s nostalgia films. This one, the pointlessly titled "Take Me Home Tonight" (the Eddie Money song of the same name is never heard, despite a wall-to-wall soundtrack of every other half-memorable eighties hit) is more of a cartoon version of the 1988, as opposed to the considerably more restrained and truer version of the same time period depicted in "Adventureland" a few years ago.
Having been a child of the eighties, I can say with some authority that while "Adventureland" feels authentic, TMHT feels like a cartoon version of the eighties, placing everyone in gaudy primary colors, gag-me-with-a-spoon-worthy haircuts, and a mall record store that appears to sell only four albums: "Whitney", "Like A Virgin", "Appetite for Destruction", and the Eurythmics' "Touch". It's almost as though younger people than I watched an MTV eighties retrospective, quickly followed by a part of a John Hughes/Molly Ringwald film, and then made this movie. Of course, MTV itself was a cartoon version of the eighties IN the eighties, so my allegations of inauthenticity can only go so far.

Which brings me to the weird part: Beneath the mostly-ineffective veneer of the decade of greed at its most decadent, there is in fact a certain simple innocence. Yes, TMHT gets started in a baaaaaaad way (the falsely confident fat friend tumbles into a store shelf, causing every shelf in the store to domino over. Cue predictably retro opening credits!), but for those willing to forgive some surface falsehoods and lazy comedy, there's a generally likeable film lurking just beneath all that. Most of the likability is owed to star Topher Grace, and a surprisingly homey Anna Faris as his twin sister.

Topher Grace carries the movie respectfully as a relatable every-slacker. Admittedly, if not for his performance (one which he could probably deliver in his sleep, but still...), this film might actually be as worthless as some critics say it is. His character is an MIT graduate who has chosen to stall out by working at Suncoast video store. When he realizes that he's been so scared of his life that he hasn't been living it (his words, more or less), that resonates. Maybe not in the context of late eighties affluence, but terms of today's epidemic of prolonged adolescence, which often times spans into peoples' late thirties. With this crucial element, TMHT proves not to be "an eighties movie", but rather a 2011 film that takes place in the eighties. Which is okay. Movies, like all art, are products of the time in which they are made. What this film lacks in period authenticity it attempts to make up for with a little hindsight 20/20 social commentary. It does a surprisingly respectable job of that, but (I'll say it again) "Adventureland" still gets the edge for its heartbreaking authenticity.

The formula is the One Magical Night, in which by the end of the big party (actually two parties, but who's counting? This was the decade of excess...), all the major character storylines will be resolved. Jerks will be broken up with, goofballs will get laid, justice will be served, impossibly awesome cars will be wrecked, true love will win out, and all will be right in the world. Or at least a lesson or two will be learned.

This film indulges the common fantasy of being able to douse lingering regrets and what-ifs, wherein one finally achieves that One Magical Night with ones' high school crush long after that ship has sailed. Simultaneously, by virtue of showing the hollowness of certain characters, it ruminates (just a little bit) on how the greed and corporate shortsightedness of that time period in many ways laid the groundwork for the financial turmoil of today. At a certain point, the characters gravitate from a raucous middle class house party to a considerably more decadent party for the upperly-mobile. Fueled by empty carnality in a cloud of cocaine, it is something out of Bret Easton Ellis through the buffer of mainstream comedy.

Continuing with the "Adventureland" comparisons, it must be said that this movie shares an uncomfortable amount of similarities to that 2009 film. Both are about insecure post-grad white guys (Jesse Eisenberg and Topher Grace) who opt to stifle themselves in a job intended for teenagers. As they inevitably must throw off their shackles in favor of living their lives, both protagonists must make the decision whether they will sell out to the material yuppie culture that ate the decade or pursue the Girl Of Their Dreams'. This conundrum is nothing new to movies, but it is and always will be fair game. The trick is to make it resonate believably.