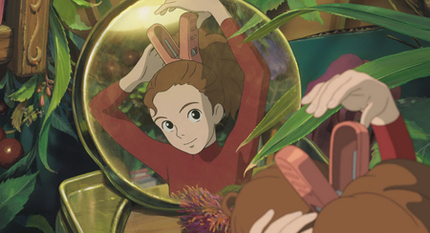 Good news for those who appreciate the legendary works of the famed Japanese Studio Ghibli. At least for those living in the Netherlands or willing to make trip over that is. Coming March "Melkweg", the popular Amsterdam based music and film venue that normally brings concerts of bands like Coldplay and N*E*R*D, will transform itself into Ghibli heaven with a special dedicated Studio Ghibli retrospective. Not only will numerous works of maestros Miyazaki Hayao and and Takahata Isao be screened on their big screen, the studio's latest creation "Karigurashi no Arrietty" by Yonebayashi Hiromasa will have its Dutch pre premiere there as well.

Furthermore, Melkweg will be displaying a part of the original Japanese Studio Ghibli poster collection of GhibliWorld.com editor-in-chief & ScreenAnarchy writer Peter van der Lugt (indeed, none other than myself). All in all, reason enough to be there, but for those not fully convinced yet: take a look at the programme.