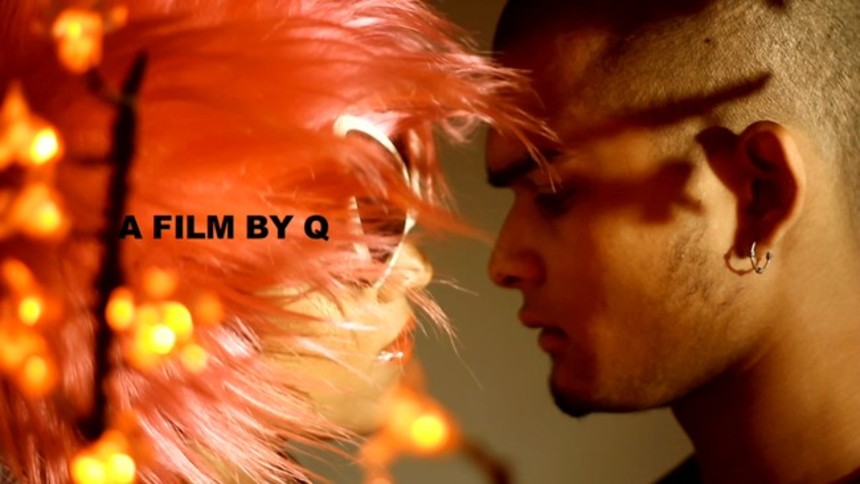 [With Q's Gandu now screening in Berlin it seems a good time to revisit my previous review.]

Bold, energetic and by turns both deliberately vulgar and sharply incisive, Kolkata based director Q is sure to turn heads with Gandu - a film that straddles a heretofore unnoticed line between Danny Boyle's Trainspotting and Gaspar Noe's Enter The Void. If nothing else Gandu makes on thing very, very clear: should he have the inclination and backing to do so Q could very easily become India's answer to Gaspar Noe.

Gandu means asshole and it is the name applied to and adopted by the film's lead character. An angry, aimless, lower class young man, Gandu lives in an apartment provided to his mother by a wealthy businessman who keeps her as a mistress. Though the relationship between his mother and her keeper is entirely consensual and seemingly quite positive, Gandu cannot see past the fact that his mother fucks for money and his anger is slowly poisoning him.

Gandu ekes out a meager existence - buying lottery tickets with money stolen from his mother's lover's wallet while they have sex, dreaming idly of the girl who is a regular at the local cyber cafe, masturbating to hardcore pornography - spending his days on his own, his one real retreat his skill for beatboxing and angry freestyle rap. He has nobody else, not until a chance encounter introduces him to an unusual rickshaw driver, a Bruce Lee obsessed young man who is every bit as much an outcast as is Gandu himself and their shared isolation forms a bond between them. A bond soon bolstered by Rickshaw's supply of freebase drugs.

For the first hour Q plays Gandu very straight, shooting it as a black and white verite style character piece. His performers are fearless, the world they live in tangible, and the entire thing is infused with a sense of nervous, crackling energy - an energy that breaks loose whenever Gandu breaks into a rap, which he does frequently. The musical element is a major strength to the picture. Gandu's style falls somewhere in the neighborhood of early era Beastie Boys but faster, the rap sequences used in a classical musical style to illustrate some larger point about the character or the world he lives in.

But after letting his characters and their world take center stage for the first block of the film, the hour mark ushers in the chance for Q to really flex his stylistic muscle. Once the film makes its turn into the final act the style changes notably. Major sequences - such as the one which provided the still image above - are shot in high gloss color, the sex moves from explicit and grimy to explicit and fetishized, and the entire experience becomes a little bit slippery. Whether the film has simply gone meta or whether Gandu (the character) has retreated into fantasy or an extended drug trip as an escape from his squalid life is never entirely clear, which I suspect is entirely the point. Dream, reality and hallucination all blend together to create a film more experienced than understood.

A potent piece of work that announces Q as a significant talent on the world stage the sad truth is that Gandu is such a niche piece of work that it will almost certainly never receive any sort of commercial release on any format. For proof of this, go to your local video store and count how many contemporary films shot in black and white they stock. Then see what percentage of those are foreign. And if they stock any Indian film at all, what percentage of those are non-Bollywood. You get my point. All the more reason, then, to get out and see / support this while you have the chance.