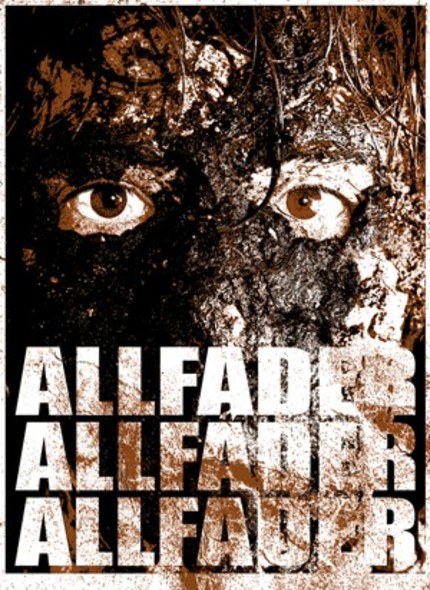 Norway's Fredrik Hana has become a favorite here at ScreenAnarchy thanks to his string of short films, pictures that combine fantastic technical skills with a creative and playful approach to story. We like this guy and have been wondering for a while when he would get around to making a feature.

And the answer to that is right now.

Hana is currently in production on his debut feature, a low budget experiment titled ALLFADER.

ALLFADER is an epic tale spanning five different periods of time. Each segment contains a variation of the same main character, with different approaches both visually and narratively.

In the first story, our main character is presented before the birth of civilization; a man without a community, completely at the mercy of nature.

In the segments to come, our character leaps from prehistoric times, to the era of VHS tapes. From there he is sent backwards in time, to the front lines of WW1. Further ventures take him to a 19th century laboratory, and finally, and conclusively, to the deepest layers of Hell.

ALLFADER is a colorful bouquet of different visual and narrative stimuli; an overwhelming flow of creative experiments pushing the boundaries of film. But first and foremost; a true love letter to cinema.

Hana plans to cut a teaser for each of the time segments of the film and we've just gotten a first look at the first one, along with a trio of stills. Things are looking very good indeed. Check them out below.

Do you feel this content is inappropriate or infringes upon your rights? Click here to report it, or see our DMCA policy.
Fredrik HanaMarius LundeSvend ErichsenIvar Nikolai FalletAleksander U. SerigstadShortAdventureComedy