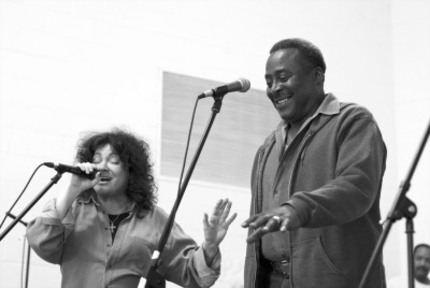 "In Louisiana, life means life."  At the infamous Angola Prison Farm - once the most feared prison in America - a life sentence also meant a miserable existence and certain death: death within walls you will never leave; violent death at the hands of other inmates or guards; worked to death on the prison farm; death by any available disease; death by court-ordered execution.  Now known as the Louisiana State Maximum Security Penitentiary, it is no longer the Angola of old - but life still means life, and even if you're not on death row, hope is hard to come by.  Blues musician Rita Chiarelli has travelled to Angola many times in the past decade, as the prison is steeped in blues history (perhaps most famously, Huddie "Lead Belly" Ledbetter is said (likely erroneously) to have garnered a pardon solely because the state governor was so taken with his singing.)

Chiarelli contacted Bruce McDonald enquiring if he might be interested in filming a concert there, and McDonald jumped quickly at the chance.  While he acknowledged that he was initially thinking of Johnny Cash at Folsom Prison, Chiarelli had a twist.  She had already played there for some of the inmates on prior trips.  This trip, she was going to play with some of musicians doing hard time there.  There's no shortage of talent within the prison, and for those inmates who have earned a little privilege, a bit of gear and a lot of time to practice helps keep them focused on positive things.

We're not just going to the birthplace of the blues, we're going to visit the blues in the living room of their family home.  Ultimately, though, while music features prominently, Music from the Big House is not significantly about Chiarelli whipping up a hot concert playing blues, gospel, funk, and country with men convicted of murder and rape: that's just the canvas.  It's much more an exploration of desperation, of forgiveness, and of the inexorable questions of whether rehabilitation is possible, and whether prison exists to reform or to punish.  Neither Chiarelli nor McDonald declare on one side or the other of these debates in the film, but the moral struggle of the filmmaker and the subjects is palpable.  Keenly shot by Steve Cosens and then rendered into stark black and white, Music from the Big House throws life on the outside into sharp relief.  Though it's a very selective portion of life behind the infamous prison's walls, we can't help but hear the plaintive desperation, the surrender, and the turn towards a sliver of hope - these things that have been the building blocks of the blues since their inception.

Music from the Big House

Do you feel this content is inappropriate or infringes upon your rights? Click here to report it, or see our DMCA policy.
Bruce McDonaldTony BurgessErin Faith YoungRita ChiarelliDocumentaryMusicMusical

More about Music From The Big House