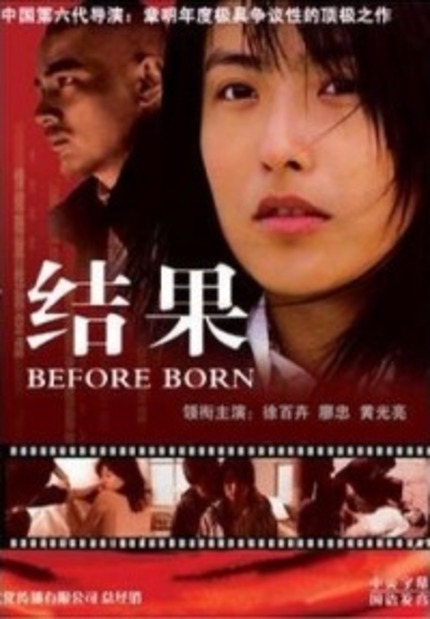 China is a big (big!) country. Their movie industry is doing good lately, but still many Chinese films drown into obscurity simply because of bad luck or lack of foreign appeal. Running into such a nice little gem always feels a little special and what better reason does one need to share these discoveries with others? Which is pretty much how I felt when watching Before Born, a neat little gem directed by Ming Zhang that truly deserves some extra attention.

Whatever little promo work you might find of this film, it's quite misleading. The poster seems to emit a rather warm and comforting aura, the film on the other hand is cold, impenetrable yet stylish and moving. A very strange (commercial?) move, but it's not the first time movie advertising goes horribly wrong. In any case, I never found more than a poster or meager plot description online, just to give you an idea of its obscurity.

Before Born is a film about people chasing goals and dreams, but seeing their lives changed and influenced by events in the margin of their travels. All three main characters are looking for someone in particular, but find each other along the way. In the end, the goal itself becomes somewhat irrelevant, dominated by the experiences they encountered in the meantime. It takes a little time for the characters to realize this, which is aptly illustrated by Zhang.

Before Born remains pretty cryptic about actual facts and events throughout, only slowly revealing key information to its audience. The essence of the story is extremely simple (and hardly surprising), but it's not until way past halfway we get some grip on what exactly is going on and why everyone is looking for this one particular character. It's a somewhat cheap but very effective trick to keep you interested in what is coming next.

While the poster for the film might be bathing in warm reds and oranges, the film itself is painted blue and gray. Zhang uses this particular filter through the whole film, giving it a rather cold and detached look. Even the scenes shot during sunny days emit very little warmth. This choice might hinder some people's emotional involvement, for me it actually heightened the experience as it goes well with the emotional state of the characters themselves.

The soundtrack is rather simple yet effective. Subtle piano music, sometimes with a little added bombast to underline the more dramatic scenes. It's standard arthouse fare, but it does work and the score itself harbors enough quality to keep it from getting irritating. Not unique or worthy of owning on CD, but it does the job.

Acting is surprisingly strong, though handled by unknown or second-line actors. This doesn't mean they aren't any good, it just means they have very little international appeal. All three main characters put in quite a performance, giving just enough emotions to their characters to make them come alive while not hurting the cold exterior of the film.

Before Born is a strange mix of crime, mystery and drama, even though there's no crime or action to be found anywhere. These little hints of genre mixing come from the lack of grip on the story early on, but they do give the film a rather special atmosphere that carries through the entire film. By the end the dramatic stretches are fully apparent, but early on you will be wondering where the film is trying to take you.

If you're not a fan of silent, Asian characters doing rather strange and inexplicable stuff from time to time, this definitely won't be your movie and it's probably best to stay as far away from it as possible. But if you love that kind of thing this will prove to be a very pleasant discovery indeed. Once you get past their stone-cold exteriors, there's quite a lot of (suggested) character depth indeed with some nice background themes for added value.

Before Born is a smart, strong and solid film, though it might not really warrant the trouble you have to go through to actually watch it. It's obscurity stands in the way of easy availability and while it's definitely a good film, it lacks a little uniqueness to call it a true masterpiece. Still, if you happen to bump into it, make sure to give it a chance. Good stuff alright.

Do you feel this content is inappropriate or infringes upon your rights? Click here to report it, or see our DMCA policy.
Ming ZhangHaiyan QinLu HuangZhong LiaoKwong Leung WongBaihui XuDrama