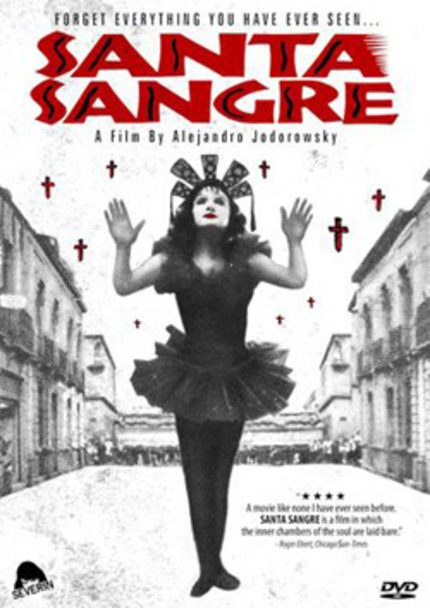 I've spent a lot of time telling you all about the different aspects of Severin Films' home video catalog and even their theatrical releases.  You would think that would be all, perhaps they'd found their niche and they'd be glad to hang out in their comfort zone, but you'd be wrong.  Having admirably tackled EuroSleaze, horror, the eternal works of D'amato, Borowczyk, and Franco, and dipped their toes into feature film distribution and production, you'd think they would be satisfied.  However, Severin Films has so much more to offer, their future is bright, and I predict that at least a couple of their upcoming releases will blow the minds of home viewers in the coming years.

I never got around to talking about one of Severin's best complete packages, the two disc special edition of Ozploitation biker classic, Stone.  A good five years before Mel Gibson hit the wide open freeways of Australia as Mad Max Rockatansky, director Sandy Harbutt made Stone, the original Aussie biker epic.  Undercover cops, biker gangs, mystery, and murder fill this cult classic.  Severin Films revived this classic for American home viewing audiences a year before the big Ozploitation push that followed Mark Hartley's awesome Not Quite Hollywood.  They were a bit ahead of the curve on this title, and they did it great justice, with a documentary, making-of, and other goodies.

Lest you think that Severin are finished with the land down under, you may look forward to Severin's upcoming special edition of BMX Bandits!  That's right, in their continuing quest to bring as many "what the fuck?" classics to Blu-ray as possible, Severin have landed this early Nicole Kidman vehicle (pun intended).  Never thought you'd see this on Blu-ray?  Well, neither did anyone else, but Severin are doing it!  Following in their own footsteps after they released 80's nudie classics Screwballs and Loose Screws: Screwballs 2, they've managed to once again raise the bar for unexpected Blu-ray packages.  Sure, we were all shocked when MGM put out Troll 2 a few months back, but that was a one off.  This disc, this package, this choice shows a commitment from Severin to release the films they want in the best possible package they can come up with.  I respect that.  BMX Bandits is scheduled to release in March of 2011.

Also coming to DVD and Blu-ray is Shopping, the debut feature from the oft-derided Paul W.S. Anderson.  Sure, he gets a lot of shit, and he's made a LOT of questionable movies; however, he also made Event Horizon, which I think is amazing.  I haven't seen Shopping, but it certainly sounds interesting.  The story of bored teens ramming cars into stores and running off with worthless trinkets, could be fun.  The film sports quite a cast, in any case, Jude Law, Sadie Frost, Sean Pertwee, Marianne Faithfull, and Jonathon Pryce among others.  This seems to be the first appearance of Shopping in its uncut form in the US, adding almost 20 minutes to the now out-of-print New Concorde DVD.  In addition, the discs will have a commentary with Anderson and producer Jeremy Bolt, as well as other interviews and trailers.  Shopping is coming this February to Blu-ray and DVD.

A very recently added titles to Severin's future plans is director and Severin co-founder John Cregan's teen comedy, Devolved. The film centers around a couple of groups of shipwrecked teenagers on an island and their struggles with one another.  It is being marketed as a teen comedy with a satirical streak, here's what Severin has to say about it:

A raucous teen comedy produced in association with Severin Films, Devolved stars Gary Entin (the upcoming Seconds Apart), Lindsey Shaw (10 Things I Hate About You), and Robert Adamson (Lincoln Heights) as leaders of opposing factions of teenagers who find themselves shipwrecked on an uncharted island off the Mexican coast. Faced with the prospect of a long-term stay, the island soon degenerates into a struggle between two groups; teens who want high school to end as fast as possible, and teens who never want high school to end. Also starring Chris Kattan (Saturday Night Live), Devolved will no doubt serve as a cautionary tale to future generations of filmgoers on the dangers of peaking at 18.

Now, for the real kicker.

Severin Films announced a couple of months ago that they'd picked up the rights to one of the greatest films of the last 30 years, Santa Sangre.   There is nothing like this film, it is in my top five favorite films ever.  I cannot gush enough about Santa Sangre, and having seen first hand what Severin managed with Hardware from around the same time period, I could not be more excited or have more faith in their treatment of this beauty.  Jodorowsky's classic has only bee available in the US on VHS, never on disc.  A few years back, Anchor Bay in the UK released a magnificent DVD edition with a wonderful documentary, La constellation Jodorowsky, but that set is now long out of print and fetching outrageous prices on the secondary market.  Fortunately for us, La constellation Jodorowsky was included in Anchor Bay's US Jodorowsky box set along with his landmark 1970's work.  In my mind, this frees up Severin to focus completely on the masterpiece that is Santa Sangre, and if any film deserves an exhaustive breakdown and analysis, it is this one.  All at once the film is a perfect example of modern surrealism, the new tradition of Latin magical realism, as well as a peak inside what I imagine Jodorowsky's dreams look like, there are few artists, living or dead, who can conjure the kind of imagery with the ease and fluidity of Alejandro Jodorwsky as exemplified in Santa Sangre.

My experience of Santa Sangre is very personal.  I found this film as a teenager after reading some film geek's list of "most disturbing" movies alongside things like Salo, Sweet Movie, and the Guinea Pig series.  I still haven't seen the Guinea Pig movies, but the rest I was able to track down.  I sat down to watch and came out of it two hours later a changed man.  It was like seeing film for the first time, I became so much more aware of what movies were capable of, the power of Santa Sangre propels me still today to find those films that will affect me like I was affected after my first (of many) viewings of Santa Sangre.  There have been a few since then: Oldboy, Pulp Fiction, All About My Mother, and more recently Scott Pilgrim Vs. the World.  They've all changed my perspective and challenged my ideas of the capability of the medium of cinema to surprise me.  It isn't necessarily about storytelling or visual trickery, it is something more primal that affects me deeply.  I don't know that any of them can touch me the way that Santa Sangre did, and I don't think I want any other film to take that power away from this film, but they all have had a profound effect on me.

Severin Films understand that reverence that many others, like me, have for this film, and they've promised a special edition like none they've yet accomplished.  They have promised a massive seven part documentary tracking the making of Santa Sangre.  The documentary was filmed in no less that five different languages and across multiple continents.  There are also awesome sounding features, commentaries, and interviews with the man himself, Alejandro Jodorowsky, stretching back to 2003.  Severin Films are taking this release very seriously, and are even blogging at length about the release, its contents, and the challenges of finally bringing the film to the US home video market in the digital age.  If Battle Royale was the piece de resistance from the Arrow Video canon, Santa Sangre is that piece for Severin, perhaps even exceeding BR in my own view.  Needless to say, I cannot wait for this release, and I reeeeeeeally hope I get an early look at the complete package, but even if I don't I won't mind skipping a few meals in exchange for the opportunity to see this film in high definition and comb through what look like massively extensive special features.

Also coming up from Severin Films is a new special edition of The Stunt Man, starring Peter O'Toole.  The Stunt Man is one of those films that should be a classic, but didn't get the respect it deserved on its original release, and had to wait years to find its audience on home video.  As O'Toole once famously said, "the film wasn't released, it escaped!"  Not a lot of info on this one yet, but Anchor Bay put out a great edition many years ago, and I would imagine that Severin would like to improve upon that, and if anyone can, I feel comfortable in Severin's hands.

I would like to thank Severin Films' Evan Husney for all of his great cooperation and help with this profile, along with his partner and Severin co-founder David Gregory for providing some great background on the company and great stories for some of the wonderful titles in their catalog.  Thus concludes the formal part of Severin's Video Home Invasion profile, but I will be keeping a close eye on them and hope to continue sharing their future awesomeness with all of you, gentle ScreenAnarchy readers.  I haven't got a solid follow up label to Severin, I'm trying to sort some things out among a few different labels, but rest assured, Video Home Invasion will return soon with some more great profiles of the heroes of independent and niche home video market!