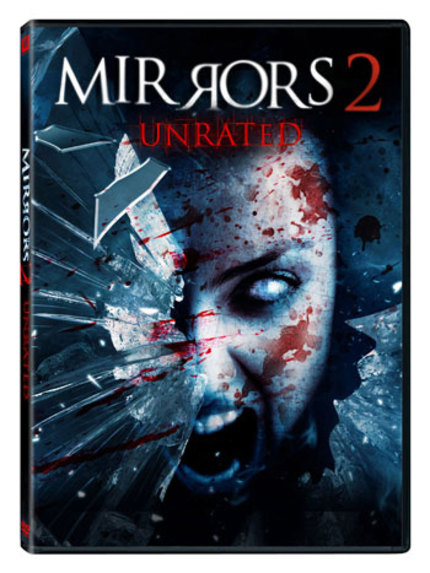 Mirrors 2 and its 2008 predecessor were pitched, I'm guessing, on the visual hook of one's reflection doing horrible things to itself, which in turn, happen in real life. I admit, looking at the number of reflective surfaces I pass by on a daily basis, it's quite the effective paranoid fantasy to imagine that at any moment one of those reflected images could decide to say, jab a pen in my eye. In fact, fear of mirrors is an actual recognized term--eisoptrophobia.

Unfortunately, neither of the Mirrors films had anything particularly interesting or compelling to say or do with their core haunted mirror premise, living off of their respective "killer on the other side of the mirror" premises, buried under not terribly engaging mysteries. In both films, the murders are the result of some sort of nascent wrath trapped inside the mirror, and the efforts of the troubled leads to confront and solve the mysteries afflicting them before insanity or death took them. Here, Nick Stahl plays Max Matheson, a man recovering from the recent trauma and guilt of his fiancee's death. His method of overcoming his frequent morbid visions and feelings of hopelessness: to take a job as the night watchman at his millionaire father's (William Katt) hotel after the previous guard became unavailable after swallowing a mouthful of glass. It's not long before Max begins seeing specters of a menacing, rotting girl (Stephanie Honore), who has been missing for two months. Her sister, Elizabeth (Emmanuelle Vaugier), hopes to find her, but the face in the mirror is most certainly not alive and well.

From there, the movie bounces between Stahl's Max being menaced by the girl in the mirror and a couple of bloody but not especially inventive kills. The shoddy special effects and lack of creativity in which the mirrors' victims are dispatched would be bad enough, however, director Víctor García has little sense of pacing or tension. Scenes just go on and on, covering the same basic structure of a person's reflection leering at them, and ultimately putting something sharp in themselves. That no one ever smashes the mirrors or looks away--or even leaves the room--makes these scenes feel more ridiculous than they already are.

Stahl (Bully, Terminator 3), is an actor who I quite like, who chooses material I typically do not. He tries his best with the role of Max, but his evocation of a man haunted comes off, after a time, as a man exhausted. The script tries to get mileage out of Max's guilt at being responsible for the death of his fiancee (glimpsed in flashback), but the ultimate cause of her death is so ridiculous, that it makes Max feel like more of a whiny downer than he already is. The energy level is similarly low for the rest of the cast, who walk from each scene and setpiece with the bare minimum of investment. The one surprise is veteran actor William Katt (House, The Greatest American Hero) as Max's dad, channeling John Glover in both voice and mannerism. He doesn't knock it out of the park or anything, it's just nice to know he's still working.

There's nothing particularly special about the advertised 5.1 audio mix: it sounds like a poorly-made horror movie. Visually, it's another story. A combination of García's poor visual sense and a pretty slapdash transfer result in a movie that's often unappealing to look at for so many reasons. The colors are muddy to muted, and the kills aren't done any favors by being lit in such a way as to expose just how cheap the effects are.

It's a two-sided disc with Side A including:
The feature film
The Other Side: Making Mirrors 2
Keeping it Real: The Visual and Special Effects of Mirrors 2
Deleted Scenes

Side B actually contains the original Korean feature, Into the Mirror, which is a lot of who cares.