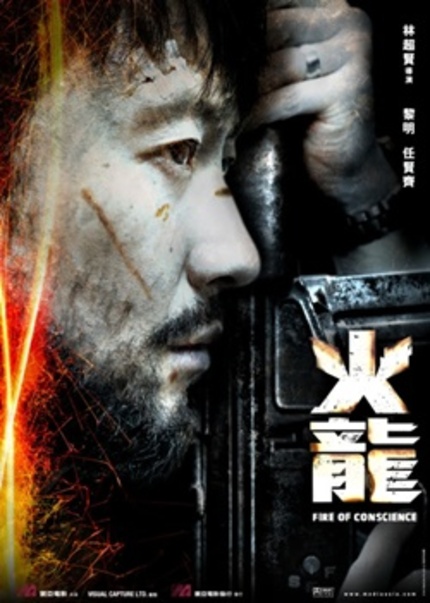 [Our thanks to Guillem Rosset for the following review.]

In the past few years there's been a revival of classic Hong Kong cinema genres, such as martial arts and action. Action thrillers about cops and robbers (which often are only separated by a very thin line) had a golden age too, so it was about time to bring the genre back with all its might. And so it seems with the latest film from the director Dante Lam, Fire of Conscience, which seems to have all the bases covered: a righteous cop with expeditive methods who's traumatized by the murder of his wife, a young promising cop who's forced to change sides by life's circumstances, sudden bursts of raw violence and spectacular shooting set pieces. The ways of these two men are crossed when working on a prostitute's murder case, and suddenly they find themselves immersed in a network of intrigue, suspicion and corruption. It sure isn't a very original story, and probably you'll find yourself in very familiar places of the genre, but at the same time maybe that's precisely what we were looking for, right?

Dante Lam introduces us to a Hong Kong filled with characters on the brink of destruction, a city that seems dangerous and menacing, where every corner could be just seconds away of turning into a battleground. Lam masterfully directs the action scenes, powerful and tense no matter its indoor or outdoor setting, with great camera work so you can feel every bullet impact. But it's not only about shooting. The pace of the film works very well, providing the necessary moments of insight when the audience can learn about the motivations of the characters and empathize with them. Because not everything's black or white, and sometimes it is not easy to tell the good ones from the bad ones. Also I have to give credit to the actors, specially Leon Lai, who deliver solid and credible performances.

In summary, it's a very good example of what we learned to love about Hong Kong action cinema. As a long time fan of the genre, I must say it's been some time since I enjoyed a film like this. It has all the right ingredients for a good old Hong Kong chrime thriller, and the overall result is really great. Fans may rest assured that the cinema from the ex-British colony still has a bright and promising future ahead.