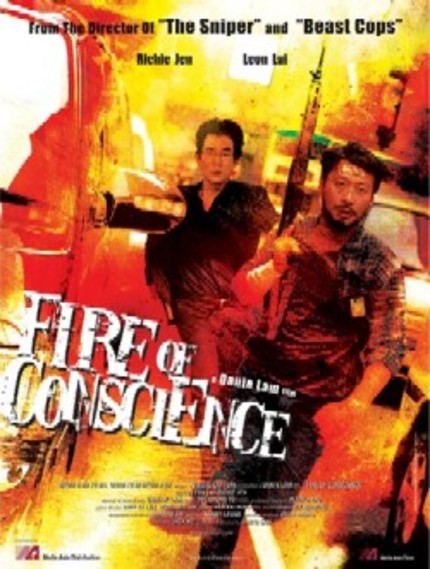 With his latest film, director Dante Lam firmly establishes himself as Hong Kong's brightest light for a possible renaissance of this once world-class hotbed of action Cinema. FIRE OF CONSCIENCE is a taut, gripping police thriller, brimming with gunplay, explosions and perilous stunt work that leaves its audience breathless and exhilarated.

Mourning the death of his wife, Detective Manfred Fong (Leon Lai) is falling apart. He lives out of his car, sports a scraggy beard and dishevelled appearance, drinks heavily and regularly takes out his pent-up aggression on suspects. His behaviour has attracted the attention of his superiors, and Internal Affairs have started sniffing around. His loyal team, including Liu Kai Chi and Michelle Ye, do their best to keep him washed, fed and on the straight & narrow, but it's proving an uphill struggle. Manfred crosses paths with the slick regional head, Kee (Richie Ren) while investigating the murder of a prostitute and the pair hit it off and soon find themselves working together after a teahouse shootout uncovers some serious bomb-making equipment.

FIRE OF CONSCIENCE wastes no time in establishing and fleshing out its characters, but mercifully restrains itself from the normal prerequisite melodrama in favour of thrilling on-location chases and gunfights, filmed in some of Hong Kong's busiest commercial districts. Intentionally evoking the likes of Michael Mann's HEAT in these scenes of fierce urban violence, stylistically Lam's film is closer to those of Paul Greengrass, eschewing Mann's steely sheen for a grittier handheld urgency. The result is a frantically paced film with precious little downtime, and audiences will need their wits about them to keep track with who is who when pins are pulled and bullets start flying.

Lam takes full advantage of the story's featured weapons dealers and bomb makers, unleashing a high-calibre arsenal of handguns and automatic weapons as well as some impressively grisly explosions. FIRE OF CONSCIENCE is surprisingly violent for a down-the-line policier - characters get shot, blown up, gassed, crushed, run over, stabbed and at one point even waterboarded. But all the while, it is handled efficiently, effectively and never feels sadistic or unnecessarily gratuitous. Our heroes are fallible, our villains are vicious and anyone can, and quite possibly will, get gunned down or injured at any moment. These guys spend long periods of the movie battered, bruised and bandaged up.

Leon Lai does an effective job of portraying the tortured, vengeful Manfred, without feeling the need to go all crazy-eyed, Aaron Kwok-style. It's his conscience the film's title refers to, and his struggle to continue upholding the law even as life repeatedly deals him the worst possible hand is portrayed authentically, with the bare minimum of sappy flashbacks or redemptive histrionics. Liu Kai Chi's Cheung-on is the character given the broken marriage and cute kid to deal with, but his admittedly rather touching father-daughter moment is nicely counter-balanced by his harbouring of a suitably unsavoury secret that threatens not only his own integrity, but that of Manfred and the whole team.

Richie Ren is at his most slippery smooth as Kee the glamorous career cop - well dressed, charismatic, with a taste for fast cars, beautiful women and big plays on the stock market. At first he appears to offer a crutch of support to Manfred, but before long it becomes apparent Kee's motives are far more self-serving. Michelle Ye ensures May is more than just window dressing in Manfred's team and her performance displays some of her best film work to date. Frequently first through the door, May proves more than capable wielding a handgun or hotfooting it through Central with an automatic rifle strapped across her chest, though is not beyond turning on the waterworks when an emotional counterpoint to the relentless action is required. In what could so easily have been a nothing role, Ye brings credibility and capability to the part. Which is just as well, as the other actresses, Vivian Hsu and Tiffany Tang, aren't given much to do but stand by their respective man or be placed in harm's way and exploited for emotional leverage.

At the end of the day FIRE OF CONSCIENCE is all about the action, which thankfully Dante Lam delivers in spades - stylishly, inventively and at a breakneck pace. There are passing nods to the stylings of John Woo throughout, not least in a moment towards the end when Lai goes one better than Chow Yun Fat's "baby in the hospital" finale from HARD BOILED, while maintaining a street smart authenticity best seen in Derek Yee's work. In short, FIRE OF CONSCIENCE is a blast from beginning to end, delivering a much-needed grenade down the pants of an increasingly tired and world-weary sub-genre.