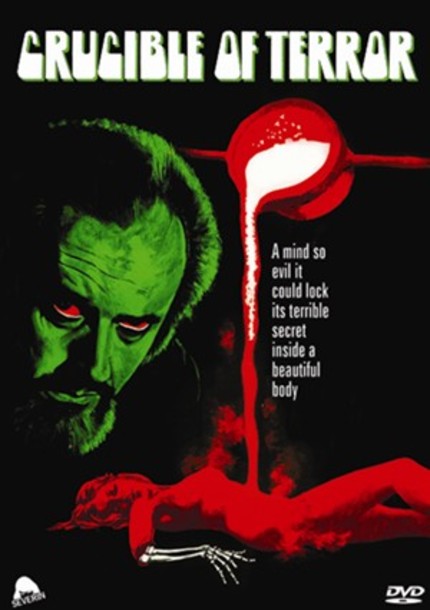 Though its star was mocked and maligned in his time and the films he appeared in were widely considered failures it may be time to reconsider the film career of Mike Raven. Because whatever people may have thought of it upon its release in 1971 Crucible of Terror - which Raven stars in and sunk his own money into producing - stands up remarkably well now and full marks are due to the good folk at Severin film for not only exhuming the largely forgotten picture but presenting it so incredibly well.

Raven stars as Victor Clare, an obsessive and - if we're being honest - kind of sexually icky sculptor and painter. Clare is talented, there's no doubt about that, but has remained obscure throughout his entire career thanks to his refusal to show his work. Because, you see, he makes it for himself and not for anyone else. But Clare's carefully guarded privacy is broken when his drunken wastrel of a son (you'll recognize him from Raiders Of The Lost Ark) steals a number of his pieces - including a very striking, life sized bronze sculpture - and sells them to a young London art dealer, a dealer who has so much quick success with the pieces that he insists on visiting the artist to obtain more work by more legitimate means. And so begins an odyssey into obsession, cruelty, sex - though not as much as you may think - and reincarnation.

In many ways Crucible of Terror is a welcome reminder of another era, a time when 'low budget' film making didn't imply 'shot cheaply and without craft on video' like it does now. Director Ted Hooker fills his picture with striking visuals and compelling characters, pacing the thing so well that even when the logic breaks down a bit it remains a resoundingly entertaining film. And key to that is Raven himself, the man delivering a performance that remains just on the good side of camp as he spends the body of the film stalking and leering at the young women while mistreating his wife horribly. Though certainly not anywhere near their stature Raven is very much in the Christopher Lee / Vincent Price style of horror, his portrayal of Clare coming off very much like a sort of seedy, grimy Price performance.

Freshly out on DVD from Severin, this is a film ready to be discovered. Though the disc is sparse, with no special features, the transfer is excellent having been struck from the only known surviving 35mm print of the film - one which the label says ways provided to them by a Bodmin Moor coven. And if that raises an eyebrow, well, welcome to the world of Mike Raven ...

Raven, you see, is at least an interesting figure as is the film itself. A former pirate radio DJ and a practicing occultist, Raven made a serious bid for horror movie stardom in the 1970s. He starred in films for Hammer (Lust For A Vampire) and Amicus (I. Monster) while also backing two films himself (Crucible Of Terror and Disciple Of Death), one of which (Disciple) he also co-wrote and produced. All four films released in less than a two year span - 1971 and 1972 - and failed so miserably that the directors of Crucible and Disciple would never direct any other features while Raven himself quit the public life to become a sheep farmer and sculptor. In retrospect I think this represents a fairly significant loss. Crucible director Ted Hooker certainly shows enough talent to have merited a continued career while Raven, I think, could have had a long and entertaining career as a secondary lead in the Amicus and Hammer stables.