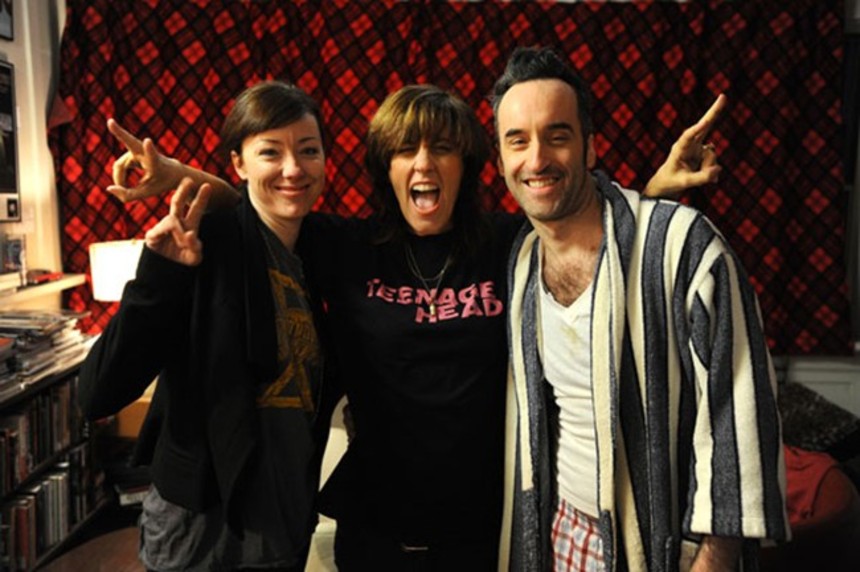 It's difficult to write about Bruce McDonald's latest film, if only because I feel like I'm examining someone else's very personal correspondence. Co-star Tracy Wright, a truly bright light of Canadian theatre, television, and film, died this summer of cancer. She was only 50. Trigger, rushed into production as her health declined, is really a love letter to her from many of the people who held her dear. Her performance is her letter back: to her husband; to her friends; to her professional community; perhaps most of all to her art. It's a letter delivered personally, so to speak.

Vic (Wright) and Kat (Molly Parker) had a measure of success with their final band together, the titular Trigger. A decade or so after their band and their friendship implode on stage due to (remember, this is a Bruce McDonald film) drugs, alcohol, sex, and self-loathing, they meet again to make an appearance at a fundraiser - provided, of course, that they can stand being near each other again. In a single night, they crash through their past, their respective addictions, their fears, and their remaining aspirations, each longing in a way for "when we were pure... when we were perfect" while knowing all the while that there isn't a chance in hell of getting that feeling back.

Writer Daniel MacIvor was initially tasked with creating something along the lines of a rock n' roll My Dinner with Andre for two women. Though the scope of final screenplay stretches beyond that format (allowing for a bit more rock n' roll, and cameos from the likes of Wright's husband Don McKellar, Sarah Polley, and Callum Keith Rennie) it remains true to the goal of being a fiercely personal and philosophical clash between the two leads, a battle between ideologies, lifestyles, and between memories and the present. MacIvor's reputation as a writer was forged in the theatre, and he's not afraid to challenge the actors with language that ranges from raunchy to poetic, rhythms that would challenge Tito Puente, and dialogue including anything from a series of interruptions to a confessional monologue. Though very much a partnership between Wright and Parker, there's a little extra meat in the script for Wright, and what she does with Trigger is career-defining work: finding layer after layer in the character; ; finding reality in the face of some stark episodes of magical realism; finding clarity and present relevance even in the most challenging and memory-laden of MacIvor's text; and above all bringing her own brand of simple, brutal honesty, in which her work is devoid of even a hint of pity for her character or herself (despite the fact that her character can wallow in self-pity.) And this I say not as a writer but as an actor: Fuck, that's awesome. I say that not (just) because she did extraordinary work when facing her own death, but because it throws into relief just how consistently throughout her career she found that honesty.

Given what's on the page, Trigger is a piece that can only succeed on the strength of the actors, and without a doubt it's a success on that basis. It's also a testament to McDonald's mastery of shooting from the hip (not necessarily literally) and the depth of his knowledge and adaptability behind the camera. I mentioned earlier that Trigger was rushed into production. Specifically, five days after the first reading of the script, at which point it was unclear whether the project would proceed, they were shooting with a pair of 35mm cameras. The production was running out of a local cafe on weekdays, going to camera on weekends, and in nine days of shooting, they had the film. It looks great, the edit is tight, there's no doubt that it's a rare breed of director that could take these circumstances and turn out a film of this calibre. Trigger also had the benefit of tremendous goodwill from the local film community, and that love also shines through. It's intimate correspondence, remember, but damn, there are a lot of people partaking of the extraordinary love therein. Partake. At the earliest opportunity, partake.
Tweet Post Submit