Indian Animated RAMAYANA: THE EPIC Picked Up By Warner Bros 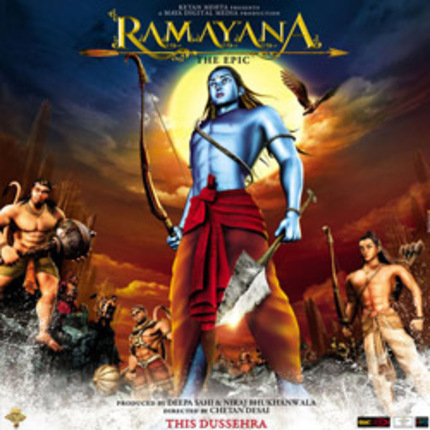 One of last years great independent film stories was Nina Paley's Sita Sings the Blues, which is a modified retelling and exploration of the Ramayana, one of Hinduism's sacred texts.  While that was made almost exclusively by one person, a remarkable feat especially considering the output, it has taken a team of animators 5 years to create this more faithful retelling of the classic story of Rama, Sita, and Ravana.  Ramayana: The Epic is also an animated feature, and probably one of India's most ambitious projects in this realm.  Following the tanking of Roadside Romeo in 2008, tons of animated projects were shelved in favor of more profitable masala offerings.  According to Business Standard, films like Avatar, Ice Age 3, and other animated features have gotten a great response in India, and as such, they've shot back onto the money men's radars.

While the animation of this project may look crude to western eyes based upon the trailer, it is still miles beyond anything we've seen India create in this department so far.  This is nowhere near the only animated feature looking to make a big splash on the sub-continent.  There are several others which I'll be covering as details become available, including the Shahrukh Khan, Kajol, Rani Mukherjee starrer Kuchi Kuchi Hota Hai, which would be a staggering success if it only made back a tiny portion of the money the original made.  There is another I'll be sharing later this evening that I think is worthy of its own news item as well.

The official website of Ramayana: The Epic, not much to see yet.