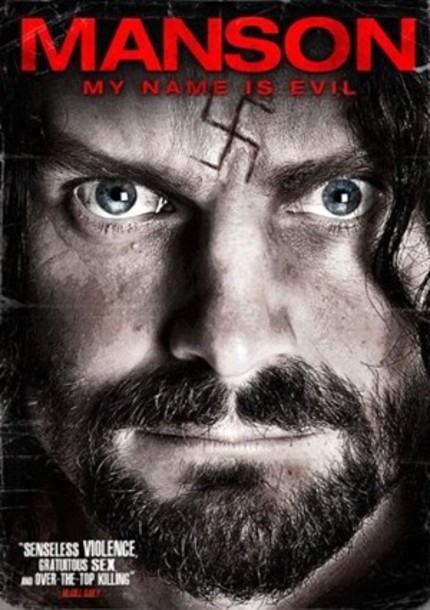 Take a look at that image to the left. Go on. Look at it. what does it say to you? Scary, no? That's Charlie Manson staring back at you and he's got the blood lust, baby. And check out that quote on the cover, the quote promising "senseless violence, gratuitous sex and over the top killing"! As Lightning Entertainment - who have just released the film via an output deal with Lionsgate - put it, it's "the definitive moment that coined the phrase "serial killing." Manson's bloodlust left a trail of dead bodies across the Los Angeles landscape."

Except this movie isn't really about that. And it's not really called Manson, My Name Is Evil, either. and if you're wondering why they would put a quote from a minor outlet like the McGill Daily - hands up anyone who didn't attend McGill who has ever read it! - well, that'd be because that's probably the only one they could find that would pitch the film the way they wanted it to be pitched, though they had to pull it way out of context to do so.

What they're not telling you is this. The author of that quote also called the film "intensely funny". And it's not a slasher at all, but a social satire that plays out dominantly in a court room. And Manson's not even mentioned in the actual title of the film because he's never meant to be the focal point of the film.

You see, this film is actually Reg Harkema's Leslie, My Name Is Evil, and for an interesting contrast in descriptions and presentation styles, I'd recommend checking the original official synopsis and the trailer over at Apple.

Now, I don't much care for the film myself and I understand that people choose to emphasize certain aspects of movies and reviews to suit their own marketing purposes all the time. Hell, I've had some rather interesting "emphases" found in quotes attributed to me on DVD releases myself, including one case that I know of where the quote given and attributed to me was actually a piece of their own press release that I quoted (properly attributed) in a post here. That one was kind of dizzying. But, people, there's an important difference between trying to put your best foot forward and outright lying about what kind of film you're selling. And this is an outright lie. It's not fair to the film and it's certainly not fair to the people who pick it up expecting to get what they've been told to expect. So stop it. Please.
Tweet Post Submit

More about Leslie, My Name Is Evil