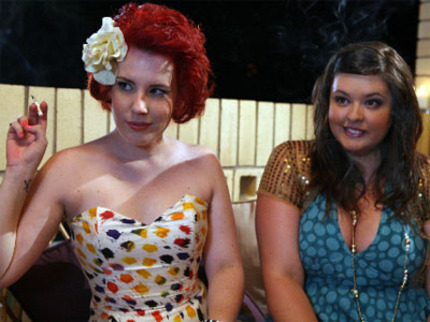 All in all seven Australian films have made the cut for Toronto 2010 including Blame, Wasted on the Young, Griff the Invisible, and Jucy.

Billed as "a womantic comedy of platonic proportions" Jucy is the new film from director Louise Alston following her breakout first feature All My Friends Are Leaving Brisbane.

Here's the lowdown, from the TIFF programme.

Jackie (Cindy Nelson) and Lucy (Francesca Gasteen) are two twentysomething best friends who've made an art of not doing much. They're so inseparable that they've earned the collective moniker "Jucy." Working together in an alternative video store, they smoke pot, play video games and actively encourage each other's eccentricities and often delusional world view.

Hectored mercilessly by their families for their various failings and the perceived negative impact that their relationship is having on each other, the pair sets out to prove that they are capable of living grown-up lives. Determined to defend their friendship and widen their world, the girls participate in a local theatre company's updated version of Jane Eyre, a pursuit that inevitably draws new players into Jucy's sphere and threatens everything the girls hold dear, including their bond.

Confident and unconventional in its depiction of female relationships, Jucy is expansive in tone, moving from the zany details of the everyday into a nuanced and dramatic portrayal of a friendship at a crossroads. Buoyed by the impressive comedic skills of Gasteen and Nelson, Jucy navigates the field between laughter and tears with energy and grace.

Check out the trailer below!
Sign-In to Vote
Tweet 0 Submit