A Clip From Daniel Stamm's THE LAST EXORCISM 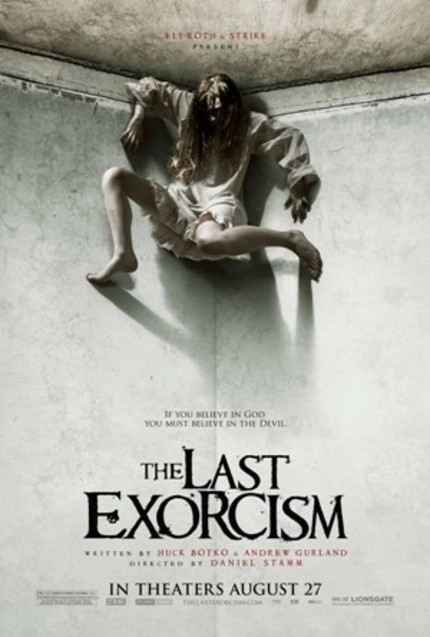 I had the chance yesterday to catch an advance screening of Daniel Stamm's The Last Exorcism - the new moc-doc style horror film produced by Eli Roth. If I'm being honest, it's not a film that I have been tracking particularly closely and while that lack of expectation may have factored into my response, I liked this film a lot. Really liked it. A lot. My full review will run when it appears as part of the Toronto After Dark festival next week but I'll give a few thoughts here.

First, the advertising campaign is somewhat misleading in the way it tries to pitch this as a shock-a-minute film. Because it's not. What shocks come are certainly solid and there's no particular shortage of them but Stamm is aiming higher. Beyond the shocks this is essentially a character study of its lead character, Reverend Cotton Marcus - the film was originally titled Cotton after him - and his tenuous relationship with faith as its put through the wringer.

There's a bit of a double ending to the film, which may put some out, but on the plus side this is one of the best written and best acted films of the type I have ever seen - if it's not a break-out role for Patrick Fabian then something is very wrong - with the added bonus of maintaining the immediacy of the moc-doc form while also being very well shot and edited. And Stamm, I think, is a pretty great director.

Anyway ... all of this to say that Empire have just released a new clip from the film, one that captures one of the quieter moments. Check it below.
Tweet Post Submit