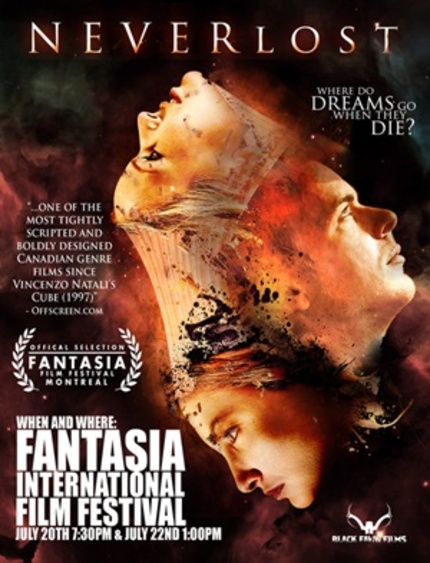 One of the goals of Montreal's Fantasia Festival is to support the rising generation of Canadian genre film makers, to seek out new talent that may be missed or overlooked by other events. And one of the big successes on that front in last year's festival was Sweet Karma, a low budget revenge tale produced by Chad Archibald that overcame its budget limits to become a pretty compelling piece of work and a minor hit at the festival that rode the wave of Montreal support down to Austin's Fantastic Fest where it had a similar reception.

Well, Archibald is back at Fantasia this year, this time as the director of Neverlost, a dark psychological thriller that balances its low budget with big ideas. Here's an except of the Fantasia guide entry for it:

One of the most tightly scripted and boldly designed Canadian genre films since Vincenzo Natali's CUBE (1997), NEVERLOST follows the psychic meltdown of sleep-deprived, depressive, thirty-something failed scriptwriter Josh Higgins, spiraling into matrimonial hell with his embittered wife of two years, Megan. The young couple struggle to co-exist in a poisoned climate of frayed nerves, resentment and incommunicability.

To cure his insomnia, Josh convinces his doctor to prescribe some sleeping pills. Josh soon becomes addicted to the little blue pills, not so much for the sleep but for the euphoric dream fantasies that they induce, which stand in stark contrast to his drab reality. The central focus of his fantasy is former college sweetheart Kate, whose angelic appearance sends him into a perennial state of swoon. A sinister father figure enters his fantasy world to cast further doubt on Josh's past relationship with Kate. Before long the lines between reality and fantasy, past and present, truth and delusion are blurred for both Josh and the entranced viewer.

The first trailer for this one has just arrived and while it is clearly another low budget effort it looks to be another compelling one.

Do you feel this content is inappropriate or infringes upon your rights? Click here to report it, or see our DMCA policy.
Chad ArchibaldRy BarrettEmily AlataloJennifer PolanskySamuel BorsteinFantasyThriller