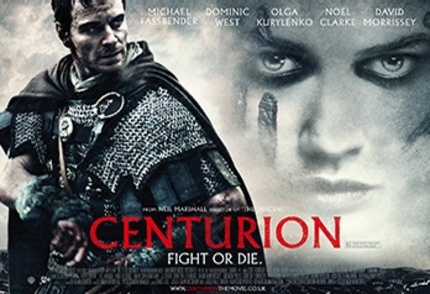 Neil Marshall has built a name for himself by making films about people invading someone else's territory and getting their "arses" thoroughly kicked. In "Dog Soldiers" it was elite troops versus Scottish werewolves, in "The Descent" it was a bonding group of girlfriends against an unknown species of cave dwellers and in "Doomsday" it was mercenaries vs. Scottish savages.

Which brings us to "Centurion" which features the exact same kind of story. This time the protagonists out of their league are a bunch of Roman soldiers, and the people they manage to piss off into a killing frenzy are eh.. Scottish savages again. Note that three out of these four films may be frowned upon by the Scottish Tourist Board despite impressively showing off the Scottish countryside.

So Neil Marshall should be careful lest people think he is a one-trick-pony. Does "Centurion" look a little too familiar for comfort? Or does it offer something unique? To answer that question in short: yes and yes... sort-of. Be warned as your mileage may vary: the Imagine crowd in Amsterdam gave this film a 6.43 out of 10, and those people can truly be seen as the film's core target audience...

After 20 years of war Emperor Hadrian is fed up with failing to conquer Scotland from the Picts and orders a final push. The Picts have been successfully thwarting the Romans by using guerrilla warfare, so this time the Romans send 3000 soldiers northward to draw out the Pictish king Gorlacon's army. Helping them is Etain, a Pictish mute girl who has a reputation for being the best and most ruthless tracker in Scotland.

However, Etain secretly works for Gorlacon. The Roman army is led into a giant ambush and subsequently massacred, its general taken prisoner to be tortured by Gorlacon at leisure.

A small group of survivors led by centurion Quintus decides to try and rescue the general. But during the attempt they make a lethal mistake, and an enraged Gorlacon dispatches a war band led by Etain to track and kill every last Roman in Quintus' party. A deadly race to the Roman border begins...

The first things you notice when watching "Centurion" are the opening credits. Almost ridiculously flashy, these float above the desolate yet beautiful Scottish landscape, and you cannot help but wonder if this was supposed to be a 3D-film or not. Maybe it's meant as icing on the cake, but if you make the icing stand out this much you might want to make the cake itself pretty interesting as well.

In this case it's hard not to be enticed by the ideas behind the film, as Neil Marshall covers some historically interesting subjects.

Firstly: looking at a map of the Roman Empire it always seems strange that it ended at the English-Scottish border, and that the Romans were so fed up with the Scots that they finally built their own version of the Chinese Wall, from coast to coast, to keep the Picts out! That wall is known as Hadrian's Wall and parts of it can still be seen today (the whole Roman border is now actually a walking trail, with many Roman ruins along the way). So it's an interesting subject and a nice reminder of just how terribly effective guerrilla warfare can be.

Secondly: the Romans do seem to be sloppy with their armies. Looking through Roman records, some appeared to have simply disappeared from the face of the Earth. Neil's assumption that one of these might have gotten stuck (haha) in Scotland and that the Romans would not want to advertise that fact seems entirely logical. Maybe that sort of thing would even warrant retreating from a country and building a huge wall? Just thinking out loud...

So "Centurion" scores points with its setting. But after an interesting start which explains the total setup it just turns into a generic manhunt movie, nothing more and nothing less. Seeing an army of 3000 being slowly whittled to bits by alien terrain, terrible weather and a careful enemy would have been very interesting, but instead we get a single fight which is over in mere minutes, and after that it's just "Figures in a Landscape, Part 6" where once again a small band of people try to reach the border before the bad guys catch up with them. The fact that it's a manhunt film with Romans and Picts adds surprisingly little to it, so even if it's a pretty decent manhunt film it never brings something new to the table. For all intents and purposes these could have been people who escaped from (a prison) / (a POW-camp) / (slave labor) / (accidentally witnessing a mob execution) and are now being chased by (wardens) / (enemy soldiers) / (Egyptians) / (criminals).

Then there is the surprisingly high-level cast. Michael Fassbender and Olga Kurylenko play Quintus and Etain, the two adversaries who try to outwit each other, and both look good yet lack a certain charisma that you'd expect. We should be praying for Quintus to succeed but he's just "some guy" and not all that distinguishable from the others. It doesn't help that Michael has to do a voice-over as well which is always tricky, especially if you have a slightly nasal voice and your character doesn't have anything particularly interesting to say. And Olga should be frightening yet she never rises above angry and threatening.

Supporting roles go to an assortment of well-known faces, first and foremost of these being the famous Danish actor Ulrich Thomsen of "Festen" and "Adam's Apples" fame. He plays the Pictish king Gorlacon but... well, he has the exact same facial expression throughout the movie. That's sort of a waste of good acting talent.

Before I make it seem as if Centurion is a terrible movie, it isn't. The chase as such isn't bad, you'll feel for at least some of the characters, and (as in all Neil Marshall movies) the violence is gritty and ruthless with several flinchworthy moments. The desaturated cinematography and the art direction seem to conspire to make the audience feel as damn cold as possible, and the Scottish landscape is a natural stunner. As such it would be unfair to condemn this film, but by the time the gaudy end credits started to roll (just as disproportionally overblown as the opening titles) I couldn't help thinking about what I'd like to have seen but hadn't...

It's a manhunt film which is not bad in itself, but the whole setting promises so much more than that and in the end the film never truly delivers. Frankly, even just looking at typical manhunt films I must say I've seen better. Couple this with a killer cast that has little to do, and you might feel vaguely unsatisfied with the end result.