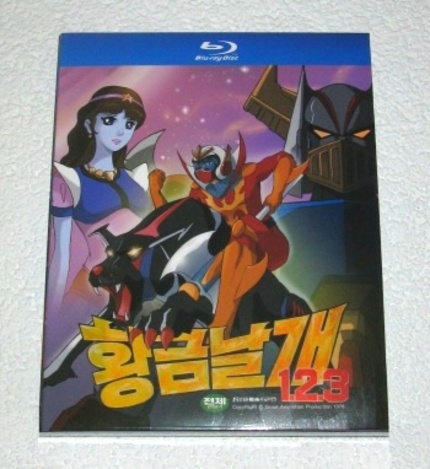 Let me start this review with a few questions: say you are able to buy a 3000-years old Greek vase, how well-preserved do you expect it to be? History may not have been too kind to it so mint-condition is out of the question. Apart from that, do you expect the vase to have been a particularly beautiful one when it was still new, or is its very age enough to keep you interested by itself?

In short: how many cracks, bare patches, chips, missing pieces and plain ugliness will you be willing to put up with just for the pleasure of "owning a piece of History"?

These are also valid enough questions in regards to the Korean BluRay release of "Gold Wing 1, 2, 3". The distributor kindly warns buyers beforehand that the original film was considered lost until a rush-print was found recently, and this print was used to create a transfer without any digital cleanup beforehand. Therefore (and I quote) "some snow, specks and cables still remain".

Fair enough, so I cannot say I wasn't warned. But when I hit play and saw the actual state of this print I said "Whaaaaaaaaa????????"....

Anyway, more about that later.

First, a few words about the actual film itself.

Young shy orphan Hyun lives with Professor Lee, who is designing a giant flying robot to help mankind. One day, Hyun comes across a badly wounded alien who crashed in a ravine, and he helps the humanoid creature reach its secret hideout. The alien turns out to be a policeman who is hunting an escaped criminal of his own species. The villain is on Earth after having kidnapped the policeman's daughter, and unfortunately he managed to ambush his pursuer. The dying policeman transforms Hyun into "Gold Wing 1": a masked superhero with a computer-steered armor and a robot panther sidekick called "Gold Wing 2". The alien then dies, but not before asking Hyun to save his daughter. He also warns Hyun that the Gold Wing armor can only be used for fighting evil, and that Hyun must keep his new identity a secret or risk losing the suit...

Hyun does not need to search long for the criminal alien, as the villain breaks into Professor Lee's laboratory and steals the plans for creating the giant robot. In his secret base the dastardly extraterrestrial actually builds the thing and has it attack Earth, but Hyun and Gold Wing 2 manage to take control of the giant mecha. Keeping it for themselves, they dub it "Gold Wing 3" and use it as a moving base of operations. Unfortunately this doesn't stop the criminal alien, whose hidden base is actually a huge armed spacecraft...

Released in 1978, "Gold Wing 1, 2, 3" had a successful theatrical run in South Korea, which was at the time still under military dictatorship. The character also featured in his own series of comic books, and for the film version veteran Korean animator Kim Cheong-Ki (of "Robot Taekwon V" fame) was hired to direct. The film is a surprisingly generic superhero-with-robots yarn of the "Science Ninja Team Gatchaman" (or "Battle of the Planets") variety. There is not a single mention of the Korean conflict at all and the story could take place... well, anywhere really.

What does stand out is the extremely low quality of the animation. This is probably due to a lack of budget, as you can see every cost-cutting trick in the book being used here. I'm not just talking about repeated use of cells, or a very low framerate (although both are very much apperent), I truly mean that sometimes there isn't any animation whatsoever. Mouths sometimes do not move even when characters are speaking, and instead of actual animation you often get lengthy pans and zooms on a still.

The designs are fun and colorful, but never actually smart. For example, the panther robot "Gold Wing 2" has the ability to turn itself into a small jet fighter, but don't expect a clever transformation: he just goes POOF and suddenly he's a plane. On top of that the foreground drawings are very clunky at times, resulting in errors of scale, perspective, and (in humans) anatomy. Hyun's face in particular is often frozen in an ugly expression, with eyes of different size and seemingly looking at two different targets. At other times Hyun just looks plain moronic.

The backgrounds, in contrast, look nice. The insides of the alien spaceships are wonderfully camp and fondly refer to the brightest space opera fantasies. You won't confuse them with anything made by Studio Ghibli but by themselves they're pretty enough.

Next we get the story, which is totally devoid of any surprises. Few films can boast that you'll know exactly what will happen throughout their entire course, but in "Gold Wing 1, 2, 3" you cannot fail to predict how any given situation will play out. At just over 60 minutes it's a short movie and there is quite a lot of story to tell, but the very predictability combined with the dull animation make it seem a lot longer.

So all in all did I like the film? Well... as easy as it is to shoot holes in it, the story of a wimpy teenager who suddenly gets to be the superhero he's always dreamt of being is always fun. If I were ten years old I'd probably be better able to overlook the obvious flaws and enjoy it for what it is. But as an adult who happens to love animation, there is little to like here. "Gold Wing 1, 2, 3" is technically unimpressive, the story is unoriginal and the production values are minimal.

On to the disc:

Good news first: "Gold Wing 1, 2, 3" has been released on a regionfree BluRay-disc as an English-friendly Limited Edition. Only a thousand of these have been struck so you do happen to own something special if you have it, but that is where the good news more or less ends.

In the intro I already said this film was in a rather rough state, but calling it that is being extremely kind. The only remaining print of the film was a rush-print found somewhere after the movie had already been considered lost for years. This print was heavily damaged, making it very difficult and costly to restore.

So they didn't. And my oh my... the last time I saw a print in such a bad shape it was a Taiwanese exploitation flick (called "The Lady Vengeance" which, incidentally, was also deemed lost for years...).

Cables, discolorations, scratches, hisses, you name it. There are also bits and pieces missing throughout the film, the audio giving a loud "POP" and suddenly you're a few seconds further into the story. It's worse than "Grindhouse" and this is the real thing! The nicest thing I can say about this transfer is that the film doesn't miss a reel.

Then again, coupled with the poor overall production values of this film it combines into a gloriously tacky presentation, completely capturing the matineé feeling of watching a film as a kid, by way of a semi-broken projector (and projected on a semi-clean sheet). 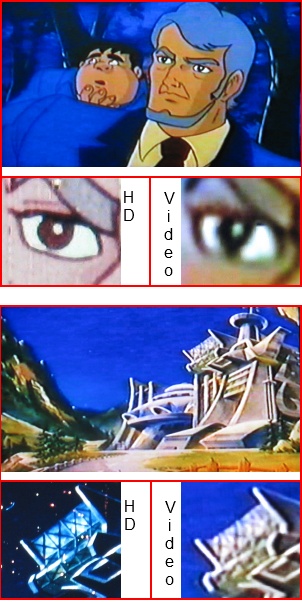 And when you manage to look "around" the scratches and the snow you can see that the HD-transfer is quite sharp indeed and although the colors look a bit pastel and rather cold, contrast is mostly good. There are two audio tracks (both Korean): stereo and lossless stereo, and I could not hear a difference. Subtitles are fine enough. They contain some spelling errors but that sort of fits in this general package and the trite dialogue is easily readable.

Extras are few, but what there is is actually quite good. No documentary on how this print was discovered unfortunately, but we do get a nice gallery of stills taken from promotion materials and the comic. For one thing, this shows that the artwork used in the comic was vastly superior to the one used in the film!

The second (and last) extra is a very nice surprise indeed: a transfer of a VHS-copy of the American version called "Golden Wing", probably to avoid being confused with a documentary about Honda's popular line of Harley Davidson knock-offs.

Yes, it's the whole same movie but now heavily cropped, very unsharp, with blown out oversaturated (and bleeding) colors, and with an English dub. However, it is also speckle-free and contains all of the pieces missing from the HD-transfer. For example you now get to see exactly how Hyun manages to climb aboard the giant robot, while in the HD-transfer he's suddenly in the cockpit already.

So in effect you get two severely damaged versions of the same movie. You can compare screenshots of the video and HD-transfer versions on the left to see which version you'd prefer: I've blown up some details, the better to show the difference. It's a devil's alternative but I prefer the scratched HD-transfer. However, it's nice to be able to watch the other version once you happen to get "snowblind".

Furthermore this package contains a small booklet (in Korean only) with some sketches and stills. It's nowhere near what we used to call "Korean Pimped" but it looks quite classy.

As a bit of historical curiosa it's easy to enjoy "Goldwing 1, 2, 3", but don't go in expecting a lost-and-found gem. The story is a dime a dozen, and any old episode of "Scooby Doo" (or even "The Flintstones") aired in the sixties will outshine this film technically.

And that is without taking into account the truly atrocious state of the print used for producing the HD transfer on this BluRay. All in all this package is uniquely awful and can only be recommended to, well.... collectors of very obscure and rare films!

It's like a centuries-old rare coin which has some collector's value, but in itself is only an ugly little corroded piece of plain metal...

Ehm... if you're still interested in this title you can buy it from our affiliate.