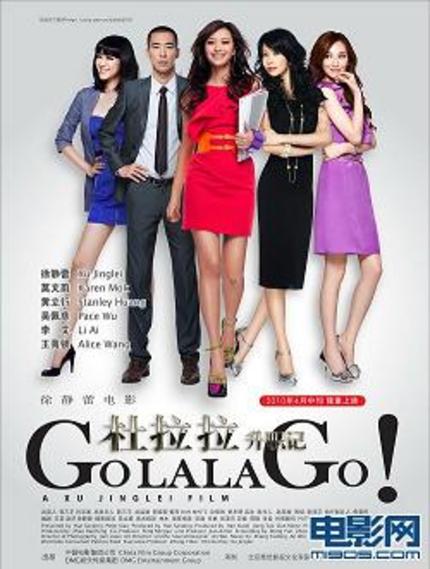 Go Lala Go sees mainland actress Xu Jinglei return behind the camera as well as in front of it for the first time since her increasingly prominent supporting roles in a trio of powerhouse Asian blockbusters (Confession of Pain (2006), The Warlords (2007) and Jackie Chan's The Shinjuku Incident (2009)).

Though she's enjoyed domestic success for some years now her previous projects as director and star have always been on a surprisingly intimate scale, whether the confessional melodrama of My Father And I (2003), the period tragedy of Letter From An Unknown Woman (2004) or the chamber duologue of What Dreams May Come (2006).

Go Lala Go is different. It's a glossy rom-com, basically. Though it flirts with a number of subtexts and is directed with a graceful, picture-perfect style that belies how flimsy the material is, it's still a story of girl meets boy, where the two protagonists wonder if they can ever make their relationship work despite all the obstacles the script contrives to throw in their path.

Based on a bestselling Chinese novel, Xu stars as the eponymous Du Lala, a plucky, go-get-'em young woman who's recently won herself a job at the new Chinese offices of a prestigious American company, and what happens once she starts working there. The title alternatively translates as Du Lala's Promotion, which gives a better idea of the plot in that the story largely concerns her rise up the ranks, and the romance angle to Stanley Huang's wealthy sales director Wang Wei is almost (if not quite) a secondary concern.

Despite the glossy sheen to everything Xu manages some memorable imagery, too, from the sun-baked, painterly lensing when the film decamps to Thailand's beaches to the first moment Lala and Wei realise their attraction, a throwaway gag involving a fountain Xu turns into something genuinely affecting, even reminiscent of her role in Zhang Yibai's debut Spring Subway.

The cast acquit themselves well; Xu can handle this kind of thing in her sleep, Stanley Huang is winningly sympathetic as her paramour (both are creditably flawed by typical rom-com standards) and Karen Mok as his long-suffering personal assistant is a pleasure to watch. Even the anonymous Americans cast as Lala's superiors high up the food chain are surprisingly personable.

Yet while Go Lala Go is a world away from the execrable Sophie's Revenge, say, its biggest flaw is that underneath the snappy production values, the upbeat soundtrack and the genial cast there's little if anything there.

This isn't merely picking at the usual rags-to-riches narrative beloved of so many romantic comedies; for all the efforts of the cast there's rarely any sense of genuine involvement, much less actual emotional investment. As a director Xu has long been better at individual vignettes than a coherent feature-length narrative, and for all the flashes of profundity we never get much of a sense of who Lala is, or Wang Wei, much less any of the supporting players.

While outright emotional manipulation isn't the best thing on which to hang a film, Xu Jinglei doesn't entirely seem to know what else to do with Go Lala Go. It meanders along without any attempt to establish a firm character arc, skipping through time at various points while leaving various characters under-developed, and the final resolution may well leave some viewers wondering if that's really it, with one promising plot thread left as nothing more than vague suggestions and the big moment so rushed it spills over into the credits.

Go Lala Go is by no means a bad film, but it never commits fully to either arthouse or mainstream sensibilities and suffers noticeably as a result. As far as Chinese romcoms go, something like Perfect Bride is a silly, undisciplined mess but in its single-minded devotion to a simple truism it achieves something far more moving, not to mention entertaining. Xu Jinglei's fourth film is a fun little story, witty, well-presented and possessed of brief flashes of real intelligence, but lacking any real direction and never aspiring to anything more than undemanding viewing it warrants a cautious recommendation at best. 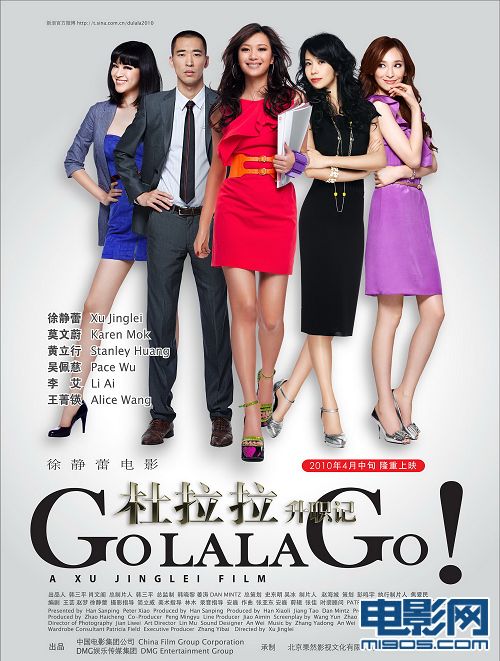 Do you feel this content is inappropriate or infringes upon your rights? Click here to report it, or see our DMCA policy.
Jinglei XuKe LiYun WangMeng ZhaoStanley HuangAi LiPeter LoehrComedyDramaRomance

You can purchase the all-region English-subtitled Chinese DVD of Go Lala Go from YesAsia here.