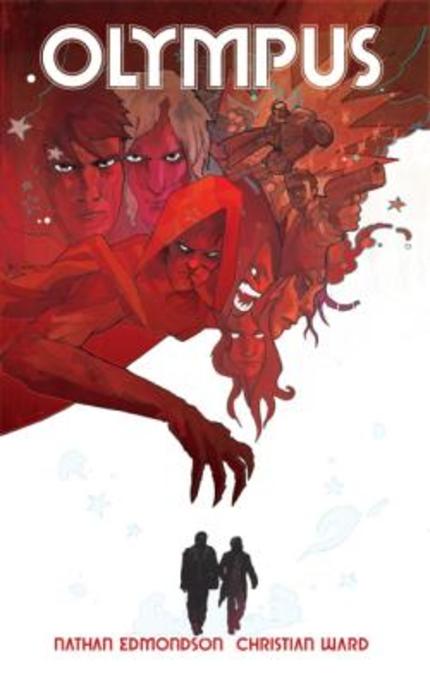 As the Academy Awards stretch on to the wee hours, here are three quick recommendations for graphic novels that are cinematic in nature yet are intrinsically literary and artistic, spilling over beyond the printed page.

OLYMPUS. Not to minimize the fine script by Nathan Edmondson, but it's Christian Ward's sprawling, extravagant art work that caught my eye in the first issue. Now that the four-issue run has been collected together in trade form by Image, it's great fun to glory in the pictures. Yet a second reading also increases my appreciation for the tale itself: two brothers granted immortality by Zeus are still serving as his bounty hunters, hauling fugitives back to hell. A great balance between words and art, though I do tend to drift off while staring at those magnificent squiggly lines. The trade includes an introduction by Bryan J.L. Glass, a foreword by Edmondson, variant covers, and several pin-ups by contributing artists. A lovely package.

CAMPUS GHOST STORY. Quentin Lee made the earnest and heartfelt indie drama Ethan Mao and, more recently, the sprightly romance The People I've Slept With, which is still making the festival rounds. But his taste for horror comes through nicely in this original work, complimented by John Hahn's artwork. Three stories and three characters cross paths; which are real, and which are visitors from another realm? Bobbing and weaving, the narrative is twisting and pleasantly mind bending, treading happily in adults only territory. Perhaps best of all, it rewards multiple reads. Published by Fresh Fear in association with Comics Genius Productions.

MESMO DELIVERY. The book starts with extreme close-ups that make it clear that writer and artist Rafael Grampa is some kind of mad scientist. He conjures up a wild, violent world that is totally deranged and a bit surreal, and expresses himself in a very unique way. Originally self-published, Dark Horse has brought out a new edition that is modestly priced and worth every penny. Bonus features include character sketches and other preliminary drawings, and an introduction by Brian Azarello.