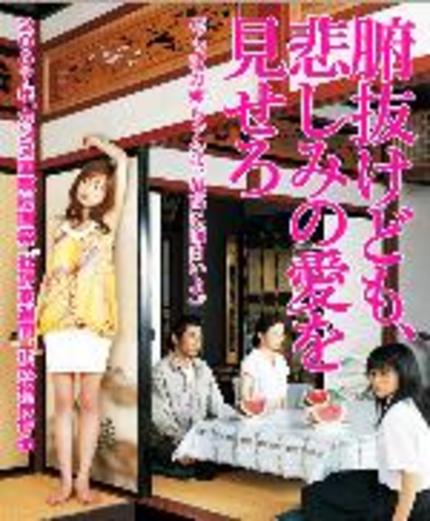 The Japanese film industry is struggling a little. These last couple of years have been lacking in fresh young talent and more established directors have been somewhat slacking. Not that there aren't any good films being made anymore, but there's a tangible difference with the early '00 years. Funuke is a very welcome exception and deserves all the extra attention it can get.

In 2004 Ishii's Taste of Tea brought the perfect mix of drama and comedy, complementing both genres to create a blissful feel-good experience. Since then the general direction of the Japanese dramedy seems to have changed a little. While Funuke could be easily categorized as one, it it pretty much impossible to compare it to a film like Taste of Tea. There's been a surge of dark, somewhat mean-spirited comedies washing over the Japanese film industry and Yoshida's film belongs with the best of them..

Funuke is a film that ties in with the likes of Memories of Matsuko and Happily Ever After. Films featuring unpleasant dramatic events, but sugarcoated with a strange, fluffy and jolly comedic layer. On paper a very unlikely combination that seems almost impossible to execute efficiently, but somehow Yoshida makes it work alright. There are pretty ugly scenes in here but even though there's a constant undercurrent of nastiness, the film remains lighthearted and amusing throughout..

The fun starts when Kyomi's parents are killed by a truck when trying to save a little kitten. This event reunites the Wago family but it doesn't take long before old wounds are once again reopened. At the source lies a manga drawn by Kyomi when she was little, which turned out to be a tad too close to reality. Her winning a manga competition tore up the family, leaving Sumiko a failed actress, Kyomi void of social contact and brother Shinji right in between the quarreling sisters. The only one doing her best to keep a positive spirit is Shinji's wife, but she gets bossed (and slapped) around by the other family members..

Yoshida drapes his film with colorful and warm scenes, which definitely helps the lighter atmosphere. The film is set in rural Japan, amongst the mountains far away from all the neon and stress. Green is a pretty dominant color, going nicely with the warm glow of the setting sun apparent in quite a few scenes. Once inside the film appears a little darker, which actually complements the events shown inside the house. Yoshida's style might not be overwhelming, but it comes off as pleasant, creative and effective..

The soundtrack is used to similar effect. Pretty jolly and lightweight, a little strange and unfitting maybe, but essential to the overall feel of the film. Maybe not too recognizable or outspoken, but a definite asset to the atmosphere. Acting is pretty strong too, with an always superb Nagase and a surprisingly good Sato. But the star of the film is without a doubt Nagasaku, the ever naive yet happy wife of Shinji. Her role is key to the comedy and necessary to provide a little diversion from the drama, even when its she that receives most of the blows..

The first half of the film is pretty tame, but when working up to its climax there are some genuinely unpleasant scenes which go together with some laugh out loud comedic moments. It's difficult to describe this exact feeling, but it plays a little like a subtle version of Visitor Q. And while this sounds doomed to fail, Yoshida magically makes it work as the film gets nastier and mean-spirited. The actual climax is equal amounts of sick and sweet revenge, leaving the audience somewhat in doubt of what they are supposed to think and feel..

It's this exact balance that makes Funuke a truly special experience. Films before never really found the right balance or gained their credit in other areas, Funuke is really the first film that hits the nail right on the head. It's a visually attractive film, with strong performances and some goofy humor. But underneath lies a mean-spirited dramatic layer that leaves a pretty strong impression. Definitely recommended!

Funuke Show Some Love, You Losers!

More about Funuke: Show Some Love You Losers