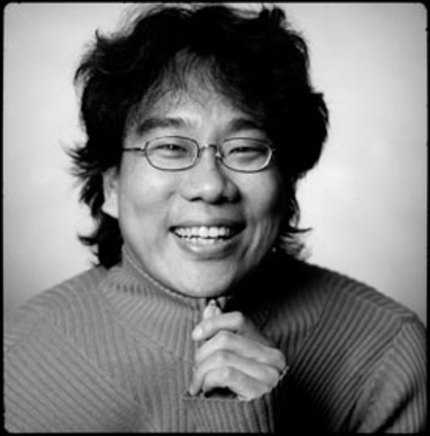 On the eve of Bong Joon-Ho's much loved thriller Mother hitting US screens - where you can see it now - regular contributor to these pages Diva Velez had the chance to sit and chat with the director.  Here is their conversation.

The Lady Miz Diva:  Kim Hye-ja, your star in Mother is very famous in Korea for playing sweet, loving mothers.  Did she have any hesitation in playing this very different type of parent?

Bong Joon-ho:  When I was pitching the film to her, cos I was in the position of asking her if she wanted to do this, thankfully enough she really liked the idea.  She didn't have any kind of reservation about taking on the role.  There was no script at that point, it was just talking, telling her the story that I had in mind and it was about ten minutes of me telling her what would happen in this film.  The contents of story was the same and the ending was also the same when I told it to her and the specifics were discussed with us later on in separate sessions, but she didn't have any reservations about taking this role on at all and that was a blessing for us because she really wanted to do it.  And she said that she wanted to do it specifically because it was so much different than what she had done before and that this was the kind of role that she wanted to do for quite some time.

LMD:  In Mother, you're dealing with a character who is mentally ill.  How do you gauge the sensitivity with which you deal with such a character as the son? How do you know when the humour in the film has gone too far?

BJ-h:  {Laughs} I must have a very perverse mind.  Strangely enough, dealing with this kind of character is actually easy and comfortable for me, it's not too foreign.  Rather than simply to entice sympathy or portray them in a cruel manner, I think what's more important with this character is the ambiguous quality about him.  That ultimately, we don't know what this son really is.  As the film progresses, we learn more and more that this person is someone we can't figure out unless you really crack open the brain and look into him.  There's a multitude of things that we come in contact with through him; there's the fear and the frustration and the horror that he might be and those are qualities that we really don't completely get to see, yet have a sense of.

LMD:  As you say, the film deals with the love of this Korean mother and son, but how do you compare that relationship to that of Korean fathers and sons?

BJ-h:  Of course with fathers in these days, I think a lot of their place in power in has changed in greater society.  When you consider that Korea was mainly a Confucian society for a long time and a paternal society, I think that kind of power and that kind of relationship has changed.  But because a mother's relationship with their offspring and their sons is something that's very primal; they've been in the mother's belly inside and I think there's something that speaks to that and that relationship is something that is very primal and still unchangeable and I think that's why there is a difference there.

LMD:  With such a twisted, interesting movie called Mother, I think many people are going to wonder what, if anything, in this film reflects your own relationship with your mother?

BJ-h:  There are very small bits and pieces of her in this film.  I mean, my mom was also a very scared person; mainly she worried a lot about her offspring, she has two sons and two daughters. There are very small bits of her in this character, but last year or so, she watched a screening of this film and since then, this is a movie that we don't really talk about when we see each other and we don't bring up. {Without translator} Never.


LMD:  Your films from Mother to The Host and Memories of Murder all have some form of social commentary, whether it's about the relationships of mothers and sons, the ineptitude of the police, or science going too far.  Is making social commentary what drives your ideas and filmmaking?

BJ-h:  It's not to say that the main purpose is to criticise or say something about society as a greater whole, but I'm more concerned with the individual and specific people and the human concerns that arise within a narrative.  Because I'm obviously making films that concern Korean characters, I think there's probably something in that regard of cultural sense in the peoples that I portray and the characters, but I think it's also hard to separate an individual from the society that they come from, as well.  So, for Memories of Murder, its main concern and question that really was at the center was why did these girls die at that point and why were the cops not able to find the killer and solve the mystery?  Those are situational things that I think are more important of that era, of that time period in Korea.  Something like The Host, the question would be why is this family struggling so on their own to solve this problem of their daughter being taken away.  Why are they not being helped?  Why are they alone in this struggle to do it?  I think by asking those questions, you kind of have a greater picture of the other dilemmas that point to make that happen in a great societal whole.  I think those are the things that I'm more concerned with more so than trying to target political commentary.

LMD:  I want to ask about your next project, The Snow Piercer {Le Transperceneige}, when we spoke last year you said you were going through a torturous time writing it.  I wondered if as both a writer and director, it is easy for you to let someone else {Park Chan-wook} direct your screenplay?  Also, what project will you be directing next?

BJ-h:  {Without translator} You are the very first one who asked about what's next after Snow Piercer! {Laughs} {With translator} Rather than that, I think if the chance comes and there's a project that's interesting I want to come upon a script written by someone else that I'll be able to just direct - the other way around!  That might be something that I'd be more interested in at some point.  If it was purely writing, I might be interested in doing a cartoon or comic, a graphic novel kind of thing.  Although I can't really say my drawing skills are that great, I'd like to see something like that published at some point, if it's possible.  And beyond Le Transperceneige, I want to try my hand at a completely new, fresh kind of horror movie.  A very scary movie.  I want to try my hand at a very scary movie.

LMD:  Can we expect that very scary movie soon?

LMD:  When will we see Le Transperceneige?

LMD:  What does the dance at the beginning of Mother mean?

BJ-h:  {Without translator} Maybe some kind of craziness.  {With translator} She has a very dazed expression on her when she's dancing, like her mind is elsewhere, but she's physically dancing.  And I think what I wanted to say with that scene is that person is crazy, that she's not in her right mind, or she is going to become crazy and possibly that she's going to become crazy throughout the movie and I'm trying to instill that idea in the audience by shooting that scene.

And it's a very beautiful expansive field, but she's very alone in that scene and that's another sense that I wanted to instill; that sense of loneliness, that sense of being by yourself, unlike the last scene when she's dancing amongst the crowd on the bus.  It's an expansive field, but that kind of singular loneliness is another sense that I wanted to create.