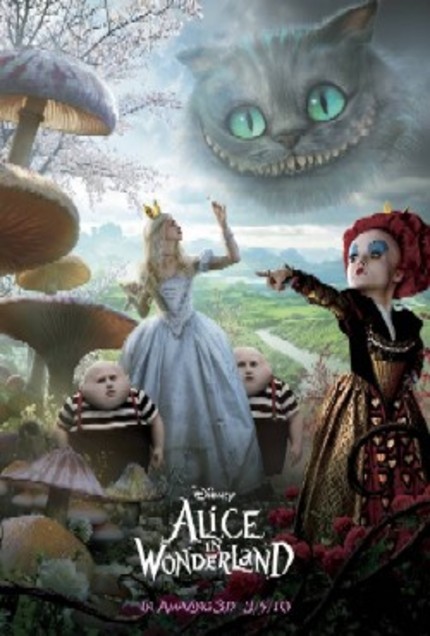 Together with The Lovely Bones and Gilliam's Imaginarium, Burton's Alice In Wonderland is one of the recent high profile films that submerges itself into an elaborately constructed fantasy world. The tale of Alice in Wonderland isn't exactly original material, but on paper Burton is the perfect director to tackle a project of this magnitude. The first reactions are quite mixed, but for me personally Burton succeeded with style.

I'm really not that big a fan of Tim Burton. The man has without a doubt a very creative mind and a unique vision, but the result is almost never something I can fully appreciate. Popular critique on Alice is that it lacks Burton's darker side, which is true to some extent. On the other hand, I've never really liked Burton's mix of dark romance in the first place. Alice is a more straight-forward fantasy tale and works all the better because of it.

I haven't read Carroll's book, nor did I grow up with the tale of Alice. Only recently I watched Disney's original version, but it did very little for me. That said, there are so many references to Carroll's book in popular culture that it's hard to go in blank. I can't really say whether Burton did a good job at translating Carroll's vision to the screen, but going in with so little background made it easier to see this film as something that stands on its own.

The title of the film is a little misleading as the story is really a mixture of both Alice books. Alice has grown up but finds herself back in the rabbit hole when running away from a marriage proposal. The land of course needs to be saved, from there on we get a pretty basic tale of capturing the sword and slaying the dragon. If you were looking for anything more profound or complex, you'd do good to adjust your expectations right away.

On a visual level this films really shines though. I watched it in sprawling 2D (no way I was going to see this through a black filter) and was pretty amazed by the world Burton had created. The intro and outro in the real world look a bit bland maybe, but once in the magical land the visuals really jump out of the screen, even when watching in 2D. There's a perfect blend of animation and live action, helped by the superb styling of the live actors and the beautiful CG backgrounds.

Depp looks pretty nice in his orange wig with green eyes, but it's really Carter's Red Queen who makes the biggest impression. Completely stylized like a cartoon character she is without a doubt the best mix of CG and live action I've ever seen on screen. Burton allows his crazy world enough screen time and makes sure he doesn't overload his audience with ever-changing fantastical landscapes (a big problem in both The Lovely Bones and Imaginarium). He succeeds in building a thorough and fundamentally strong world in prime style, which is all I really wanted from this film in the first place.

The music by Elfman is okay-ish but not all that great. On the other hand, there are no songs or outbursts of singing during the film so I guess I should just consider myself lucky after all. The acting is quite strong, with a nice roles for Depp and Glover and some prime scenes for Carter. Same goes for the voice acting, properly helmed by people like Alan Rickman and Stephen Fry. They give the film some welcome maturity not found in its setting. And then there are of course the chubby twins, who steal the show whenever they appear on screen.

If you're coming for a good story then Alice In Wonderland might be pretty boring. Burton takes little time to build up his characters and doesn't elaborate much on plot points. If anything, he indulges in nonsensical scenes and random craziness, though very fun and often extremely entertaining to watch. By the time Burton arrives at the climax I was already sold to this film, which probably explains why I didn't mind the somewhat lacking action scenes at the end. The setting was still awesome, but sadly Burton is not one to shoot enthralling action sequences.

Even though I expected very little, the style of Alice In Wonderland is imaginative and strong enough to carry the whole film. There are definitely some technical accomplishments here, like the blend of animation and live action, but it's Burton's style that thrives the film to greater heights. One of the best Burton films I've seen so far, I hope he continues on this path, leaving out the darker elements (which really aren't all that dark to begin with). Recommended material.