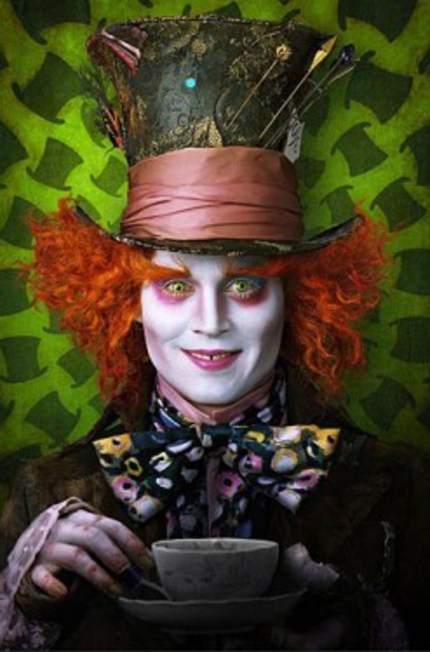 [Our thanks to Mike Sizemore for the following review.]

Sky 3D were kind enough to invite me along to last night's Royal premier of Tim Burton's Alice in Wonderland in London so I got to briefly tread the same red green carpet as Johnny Depp (although I was asked to sign less autographs) and don my shades in the presence of Prince Charles and Avril Lavigne. So the evening was a surreal experience even before the rabbit hole tumble.

The movie features a British who's who of voice talent and the majority of them braved the rain to watch their mostly CGI rendered performances for the first time.  Helena Bonham Carter, Alan Rickman, Michael Sheen, Christopher Lee and the indomitable Barbara Windsor were in fine form with fans and press alike. Depp especially seemed determined to ignore the weather and stay outside with the fans as long as possible signing countless autographs and speaking to soaked souls who had been waiting for hours, many in full fancy dress.

It turns out that waiting for the Royals to do their thing is as tedious as any anti piracy ad and just as unskippable, but once the fanfare was out of the way and the cast had appeared briefly on stage to thunderous applause we were more than ready to meet the new Alice.

Burton has taken the tricky route of attempting a sequel of sorts to the overly familiar Alice story and I'm happy to say he pulls it off rather well. Alice is now 19 and plagued by bad dreams, an increasingly stifling extended family and the social etiquette of the day. Holding on to her childhood as she does means being easily distracted so one white rabbit chase later and she's suddenly back in a Wonderland that she doesn't quite remember or believe in anymore.

This provides Burton the framework to revisit the set pieces you expect (such as the tea party) while putting a little fresh twist on proceedings. Linda Woolverton's script ties everything up nicely and even though some of the plotting seems a little slap-dash in places it all move along at a brisk, enjoyable pace and the children around me seemed to be having a great time.

Adults and long time fans may be disappointed that this isn't a darker Burton movie, but by keeping things light this Alice effortlessly surpasses other fantasy films that fell so horribly short of their potential. The weightless appearances (and disappearances) of Stephen Fry's Cheshire Cat alone has more charm than the recent Narnia movies and Golden Compass combined.

Depp makes an excellent Hatter. Traumatised and suffering from split personalities it's a nice touch that in his few coherent moments he seems aware that he's gone insane allowing Depp to briefly add a little humanity to the character. Everyone else seems to revel in the process, Helena Bonham Carter probably having the most fun as the large headed Red Queen. Stealing every scene is Matt Lucas as both Tweedledee and Tweedledum, but special attention should be given to the central performance.

Mia Wasikowska should already be familiar to ScreenAnarchy readers from Spencer Susser's quite remarkable zombie short, I Love Sarah Jane. As Alice, Wasikowska not only manages to hold her own against a cast of acting heavyweights she's also one of the very few fully human performances - shrinking and growing moments aside - and she positively shines in every scene. As very difficult it is to step into the shoes of such a well loved character, Wasikowska does so with relish and makes Alice her own.

The 3D process although added quite late in the day manages not to feel like an afterthought. Wonderland is certainly not the rich and immersive world that James Cameron created in Avatar, but it rather gives the movie a hyper-real, almost pop-up book feel that suits the story well. Especially in the climatic battle scene between Alice and the Christopher Lee voiced Jabberwocky.

And as with Avatar I'm again left a little jealous of the youngsters that will get to experience this particular cinema outing. It's also refreshing to see a female lead have so much fun in an adventure while reminding Alice's target audience that doing six impossible things before breakfast is something to be held onto no matter how old you are.