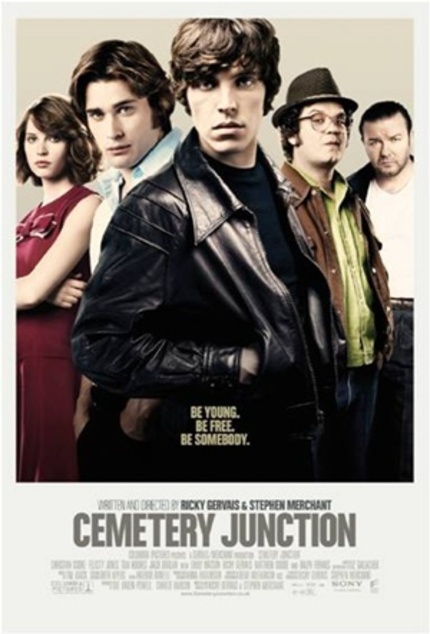 Ricky Gervais' transition to big screen stardom has not been smooth. No, despite a massive and hugely loyal following for his TV work, the creator of The Office has struggled to find a big-screen persona that works for him, his efforts so far generally being mild disappointments and under-performing. And so with Cemetery Junction - written and directed by Gervais with frequent collaborator Stephen Merchant - he's trying something different. He's letting someone else be the star.

In 1970s England, three blue-collar friends spend their days joking, drinking, fighting and chasing girls. Freddie (Christian Cooke) wants to leave their working-class world but cool, charismatic Bruce (Tom Hughes) and lovable loser Snork (Jack Doolan) are happy with life the way it is. When Freddie gets a new job as a door-to-door salesman and bumps into his old school sweetheart Julie (Felicity Jones), the gang are forced to make choices that will change their lives forever.
The full trailer is out and looking good.  Check it below!
Sign-In to Vote
Tweet 0 Submit

Do you feel this content is inappropriate or infringes upon your rights? Click here to report it, or see our DMCA policy.
Ricky GervaisStephen MerchantTom HughesChristian CookeRalph FiennesComedyDrama