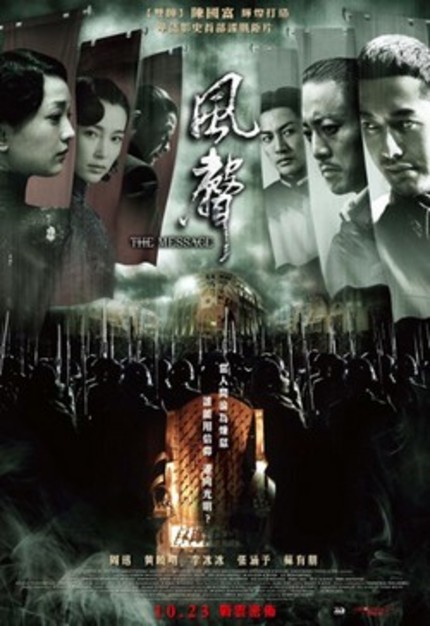 Although it can be summed up as a propagandist spy drama with an (un)healthy dollop of torture-porn, "The Message" by Gao Qunshu and Chen Kuofu turns out to be a lot more entertaining than this description implies. The reasons for that are legion: good production values, more than decent acting, an intriguing story and above all an ambition to give the audience a good time.

Recently it was released on DVD in Hong Kong by Joy Sales, and even more recently I got my grubby paws on a copy.

It's 1942, and China is in civil war. The area surrounding Nanjing is controlled by the Wang government, who are openly allied with the Japanese forces still occupying the city. But anti-Japanese rebels keep undermining the Wang rule, sabotaging Nanjing's assets, and assassinating key figures who are known to be pro-Japanese. Worse, the rebel organization keeps getting fed classified information, which allows them to choose their targets wisely. Nobody seems to be safe...

But Japanese military officer Takeda is able to pinpoint a possible leak to the Wang government's very own Counterinsurgency division. To trap the person responsible, the Japanese create a fake message, and when it has leaked, everyone who handled that message is lured to a castle in the countryside for an ehm... extensive security meeting.

This meeting starts innocent enough, with the Chinese Counterinsurgency people being suitably offended for having been called to this remote place. But irritation is quickly replaced with horror, when they are told that no one is allowed to leave until the mole in their midst is identified. It's the start of an elaborate cat-and-mouse game in which everyone turns on everyone, and whenever a person gives a wrong answer, he or she gets a one way trip to the torture rooms.

And to make matters worse the fake message contained a dangerous trap for the resistance. So the mole cannot just try to keep a low profile, but also has to find a way to warn the rebels...

Based on a famous (in China) series of spy-novels, "The Message" quickly shows its true colors: everything looks slick and glamorous, from the huge sets and crowd scenes to the blatant over-use of special effects. The reveal of the title especially is almost hilariously over the top. Similarly, the series of captions describing the set-up leave no doubt as to what the political statement is going to be here. The opening is almost a warning to those who came to the movie expecting an intimate little drama about collaborating with the enemy. Instead, it is clearly established that the rebels are the heroes here, and that the Wang-government are traitors to China.

But just when you get afraid this will all be mindless pro-China propaganda, the story moves to the creepy secluded castle and the actors get their chance to shine. What follows is actually a very well-made and thrilling "whodunnit". All performances are fine but the lead actresses Li Bingbing and Zhou Xun are truly excellent here, while Huang Xiaoming makes Takeda a far more interesting character than the one-dimensional stereotype he could have been.

The acting really saves the film, for the whole intrigue itself is clever rather than brilliant, with none of the revelations really packing a punch. And after "The Message" resolves its mystery storyline it continues with a fifteen-minute epilogue, praising the courage of the lost comrades. Yet even though this segment is clearly the propaganda part of the film, it still manages to be moving instead of boring. That's not because of political fervor displayed, but with such stellar acting you can't help but care about some of the characters who got damaged.

Speaking of damage, the torture shown here is (thankfully) not as disturbing as it could have been, partly because more is implied (ominous close-up of implements, brrrr...) than actually shown. But more importantly, most of the torture is done by bad people to eh... other bad people. Whenever the mole manages to frame a supposed colleague, he or she is dragged kicking and screaming to some horrible device (or worse, a giggling little man with a collection of little bottles and accupuncture needles) but... well, you don't think the evil Japanese will get it right the first few times, now do you? So after accidentally killing off some of his staunchest allies you see Takeda getting more nervous and this does add to the fun.

Don't expect a classic for the ages, but don't dismiss this film either. Gao Qunshu and Chen Kuofu have delivered quite a ripping yarn here with strong performances, art-direction and cinematography. The film is spiced with some gruesome violence and loads of (melo)drama, but manages to avoid being too gory or too teary-eyed.

On to the DVD:

With its glamorous appearance, detailed sets and costumes "The Message" cries out for a BluRay release but alas, so far I haven't seen any. This review is for the Hong Kong DVD by Joy Sales which, thankfully, is no underachiever in the video and audio department. The image may be a bit softer than I'd like but to be entirely honest I have been spoiled rotten recently with some of the excellent BluRay-releases coming out of Hong Kong (most noticeably both "Red Cliff" films and "The City of Life and Death"). Truth is, the image is fine with clear blacks, good contrast and fine colors. The audio is very good and the English subtitles only contain the tiniest mistakes of the sort not picked up by spelling checkers. The film looked and sounded never less than engrossing on my television.

Next we go to the extras and an annoying discovery. Until 2046 English will be one of the prime languages of Hong Kong. Why then are the extras on this disc not subtitled in English? Ah well... anyway, this is a single-disc release and here is what's on it:

First up is a "Making of": a 25-minute long documentary which shows a lot of backslapping amongst the directors and actors, but it gets interesting when they show the special effects and the building of the sets. The main "castle on the cliff's edge" is an amazing location and it is funny to see how much of it is real, set or cgi.

Next is the teaser which is a 4-minute mash-up of the trailer and some glimpses from behind the scenes.

Next is the abovementioned trailer.

Next is a Music Video, which is a 4-minute mash-up of the trailer and some guy singing. Frankly I didn't watch long enough to see if the guy was Alec Su (the idol who also stars in the film itself) so I don't know if it's him or not...

Next up are no less than nine still galleries: one for the movie, one for behind-the-scenes, and one for each of the seven main characters. Normally I'm not that big a fan of still galleries on a DVD, but I have to give Joy Sales a compliment here for the way in which these have been ordered in the menu: instead of a straight list we get a group photo, and clicking on a person opens that person's gallery. The shots are a mix of stills from the film and glamour shots for publicity purposes. Rest assured that both Li Bingbing and Zhou Xun are very well represented here.

All in all this a fine disc. I'd have preferred a BluRay of course, but in its absence this one certainly does the job nicely. Therefore this disc comes recommended, as does the movie itself.

You can order this DVD through our affiliate

More about The Message