The Men Who Stare At Goats review 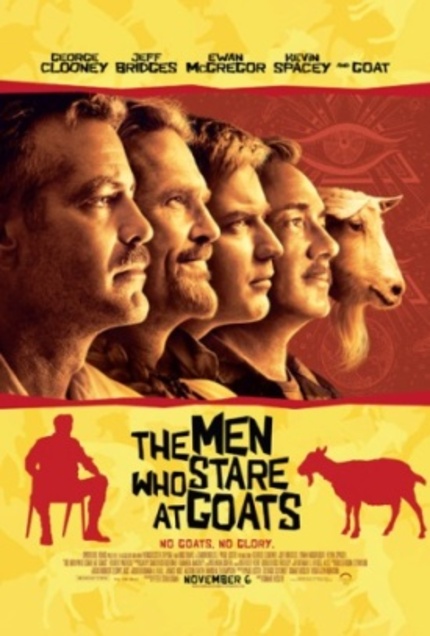 With a title like this you're either watching a self-indulged socially engaged arthouse flick directed by a mid-thirty year old or a funny, deadpan comedy which is only too aware of its own silliness. Heslov made the latter, which is a great relief. A rare chance to watch a bodily cast of big names make a complete fool out of themselves.

Heslov based his film on the book by Jon Ronson, a study on psi-warfare in the USA. While the book sticks to the facts, Heslov's film is a tale of fiction based on Ronson's book. Not a bad move, seeing how ludicrous many of the described events are. Rather than raising too many eyebrows on the "based on true events" label the film drapes a comforting screen of fiction over its story, making it a lot easier to enjoy.

It's a small miracle how a relative newcomer like Heslov gathered such an impressive cast. Even though the premise is reason enough to watch the film, names like McGregor, Clooney, Bridges and Spacey will grant the film a pretty wide audience. Maybe a little too wide, as the humor is not really all that accessible, but watching so many big names lend themselves to a film like this is always comforting.

The actual story is quite simple. After some personal issues McGregor becomes a journalist looking for a story to tell. When he runs into Clooney, psi-warrior deluxe, he somehow ends up in his world and slowly uncovers a truly strange tale of Jedi fighters and men who can kill goats simply by staring at them.

Stylistically The Men Who Stare At Goats is a very simple film. There are some nice shots, but considering the setting very little is done to turn it into a visually pleasing experience. The soundtrack is equally forgettable, mostly using some classic rock tuned linked to a remark made by Clooney halfway through the movie. It's not at all bad or ugly, just rather uninteresting.

Acting on the other hand is more than solid, with a truly splendid effort of Clooney who feels very much at ease in his role. He does a lot of staring, avoids any smirking or winking and plays a deadly serious army dude who believes he can mindbend anything and everyone to his command. Spacey is a little underused, Bridges maybe a bit too close to his role in The Big Lebowski and McGregor a tad too happy, but the three of them complement Clooney's character rather well. The whole cast is visible enjoying themselves, always a good sign.

Watching this in theater, not too many people seemed to enjoy the joke. The downside of such a cast of stars no doubt, as deadpan humor is wildly unappreciated. Their loss, because Clooney and company are really putting on a terrific show. The source material is genius of course, but the way it is downplayed is just as praiseworthy.

Genuinely funny big budget American comedies are very hard to come by. In a time where best picks involve films like The Hangover it's refreshing to see a film like The Men Who Stare At Goats hit the big screen. Two thumbs up for Heslov for getting this film off the ground.

The Men Who Stare at Goats