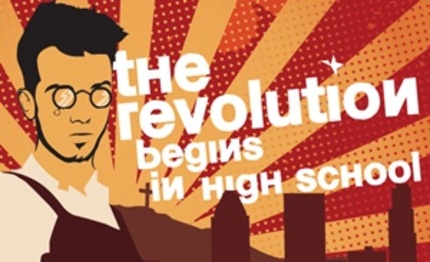 Leon Bronstein (Jay Baruchel) has a destiny: as the reincarnation of Leon Trotsky, he's going to live his life in parallel to his antecedent's path, up to and including his assassination if everything goes as planned.  Never mind the fact that he's still a high school student in Montreal, all bourgeois fascists should beware!  When the strike he instigates at his father's factory opens a rift in the family and results in Leon's exile to a public school, he attempts to joins the Student Union, only to discover that it isn't an actual union.  Driven by his passion and sense of destiny, Leon sets out to form an actual union for students.  All the while, in his attempt to follow Trotsky's path, he woos an older woman named, like Trotsky's first wife, Alexandra (Emily Hampshire).

Writer/Director Jacob Tierney has spent plenty of time in front of the camera, and when good actors turn to directing, you can usually bet that they know enough about working with other actors to get good performances out of their cast.  While Baruchel is showing some serious chops, the rest of the cast of The Trotsky is equally superb, and the film benefits greatly from a wealth of committed work from the likes of Geneviève Bujold, Colm Feore, Liane Balaban, Jessica Paré, and Saul Rubinek, just to skim the surface.

The screenplay deftly balances passion and absurdity.  If there's a flaw in the script, it's that Principal Berkhoff (Feore) and some of the other "fascists" are scripted more as caricatures rather than offering a legitimately contrary philosophy, but this is a minor quibble in the context of a film of this vivacity. Though not without national and local reference points (the E-Talk interview; the Ken Loach retrospective at the Cinematheque) the film's humour and appeal stretch well beyond Canada, and recently earned it the Tokyo International Film Festival's Audience Award, and a nomination for the Tokyo Grand Prix.  The Trotsky is scheduled for release in May, so prepare for solidarity!

Do you feel this content is inappropriate or infringes upon your rights? Click here to report it, or see our DMCA policy.
Jacob TierneyLiane BalabanJay BaruchelTaylor BaruchelDan BeirneComedyDrama

More about The Trotsky