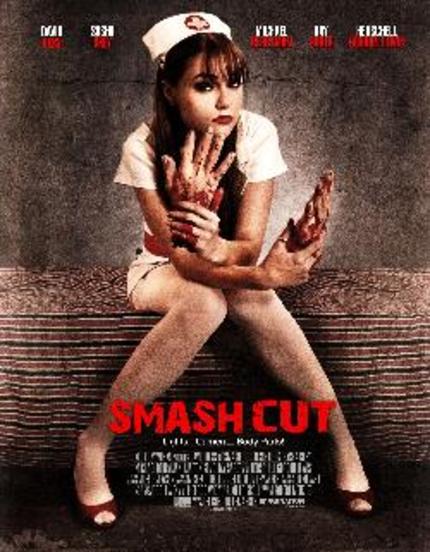 B-movie fiends, prepare for a campy dose of low budget splatter.   Lee Gordon Demarbre's Smash Cut is a loving tribute to the 1960s gore cinema of Herschell Gordon Lewis (who makes a delightful if brief appearance).

When failed horror-film auteur Able Whitman (David Hess, who's no stranger to horror flicks) accidentally kills his stripper muse Gigi Spot in a car crash, he discovers the key for horror cinema success: real corpses.  Is there blood?  Buckets and buckets of it.  Are there spare body parts?  Dr. Frankenstein was an amateur.  Is there a plot?  Good heavens, you're not watching it for the plot.  There's enough story to keep Whitman going from kill to silly kill, and to lead to Whitman's final showdown with celebrity detective Isaac Beaumonde (Jesse Buck) and Gigi's intrepid journalist sister, April Carson, played by porn icon Sasha Grey.  Grey suggested in Steven Soderburgh's  The Girlfriend Experience that she really can act, and her willingness to do anything in front of a camera makes her fearless about deliberately embracing the cornball style of acting that Smash Cut requires. In case you're wondering, she keeps her clothes on, but there are a few scenes in the exotic dance club The Ass Menagerie to ensure some gratuitous living flesh.

If you aren't inclined towards early splatter pics, you're going to be bored.  There's really no way to take it seriously outside the context of its tradition, and it doesn't really want you to.  All it asks is that you cheer and/or drink for every cut and splash.  If that's your blood type, transfuse with joy.


At Whistler, Smash Cut was preceded by the local short film To Hell and Back: A Musical Odyssey, in which Satan watches Hell's music video channel.  Plusses: good makeup; saucy, topless demons; death metal fiends feasting on Nickelback; and dozens of drunken/enthusiastic crew and friends who made the start of the screening extra boisterous.  On the downside, it's a bare premise that offers no progression, and isn't written or shot with any particular skill.  It's too long for what it is, and its welcome wears out quickly.  So did filmmakers and their friends, almost all of whom left by midway through the feature.