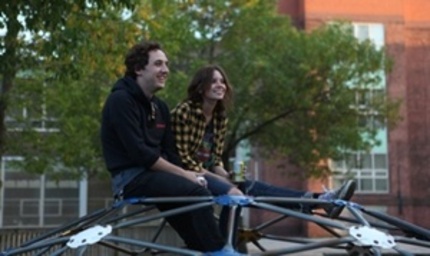 An unlikely romance blooms between Rennie (Ryan Arnold), a young artist who's scraping by and has hopes of one day making a living off his paintings, and Paige (Jayme Keith), a party girl with big debts and dirty secrets.  Actually, Paige's big secret - she sells her panties, pee, and other delicacies to a broker (Roger Bainbridge) who supplies perverts with their monthly fix - is revealed to us all too early, and isn't nearly as salacious as the filmmakers might have hoped.  There's a lot of content that seems intended to shock but isn't nearly as racy as it might have looked on paper, and the punch is further diminished by an absolute lack context for these actions in our mystery girl's life.

The best thing Skidlove really has going for it is a consistent sensibility - a low-fi aesthetic that suggests the limitations and obtuse reasoning of the titular skids (for anyone who was around when the term "skid" was in common use, you're probably going to consider it misapplied here, despite some dark eye makeup and rock and roll shirts.)

The underscoring music is a constant intruder, unnecessary and unsuited, and it interferes with much of the piece.

The casting and acting are hit and miss. If the cinematography of Skidlove stood up to its first shot (a brief, glorious, drunken, weaving-bicycle night-shot which is echoed on occasion) we'd be dealing with a powerful camera indeed.  Sadly not the case.  Much of the piece is captured in fixed-camera set-ups without a particularly inspired eye for framing this bleak world, though there are some lovely transitional moments where cinematographer Chris Clifford shines some visual vitality onto the screen.

In the world of no-budget to ultra-low-budget filmmaking, a film generally requires a vibrant script and consistently sharp acting to succeed.  Skidlove doesn't sustain these factors long enough to suggest that it's a well crafted piece of storytelling, but the cumulative effect is rather like the looking through a kaleidiscope - filtered, fragmented, and the memory of it becomes more grand than the initial experience.  As the Writer, Director, Editor, and Star, there's too much on Ryan Arnold's plate for him to excel at them all, and too little support to craft a solid feature.  A spirit of independence is alive and well in the piece, a kind of fuck-you-I'm-gonna-make-my-film vitality that always deserves a nod, but it's the kind of auteur-driven work that makes one note that Jean-Luc Godard's maxim that all you need for a movie is a girl and a gun (or in this case a knife) is true for Godard, not for everyone.

(Skidlove received a special nod from the jury at Whistler for Jayme Keith's performance, which is indeed one of the film's virtues.)

Do you feel this content is inappropriate or infringes upon your rights? Click here to report it, or see our DMCA policy.
Ryan ArnoldJames AlgieRoger BainbridgeJayme KeithDramaThriller