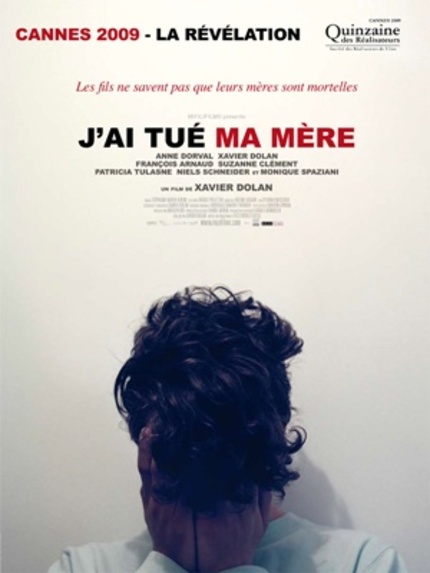 [Our thanks to Andrew David Long for the following review of Canada's 2009 Oscar submission.]

17-year-old Hubert has a love/hate/mostly-hate relationship with his mother.  Compounding the troubles of that fully dysfunctional relationship, he has no real relationship to his father, and he hasn't come out of the closet to either parent.

Lauded heavily at Cannes and damn near every other place it's been, J'ai tué ma mère is nearing the end of its primary festival run, and having missed it elsewhere, I'm grateful for the chance to catch it here.  It's been written about significantly elsewhere so we'll be brief: Though the title translates to English as I Killed My Mother, this isn't a slasher flick or a crime drama by any means:  it's a semi-autobiographical art film in a very French tradition.  What makes it utterly compelling is the viciousness with which Hubert attempts to manipulate, bully, and blame his mother, and her often raging and equally manipulative ripostes.  Though I'm calling it an art film, let's be clear, this is not indulgent storytelling.  Having written it at the age of 17, Xavier Dolan then directed and starred in it at the age of 20, and he administers an undiluted dose of the fury and confusion of frustrated youth.  It's a thoughtful, brutally honest, carefully shot and swiftly paced portrait of a fractured relationship that can be neither fixed nor abandoned.
Tweet Post Submit