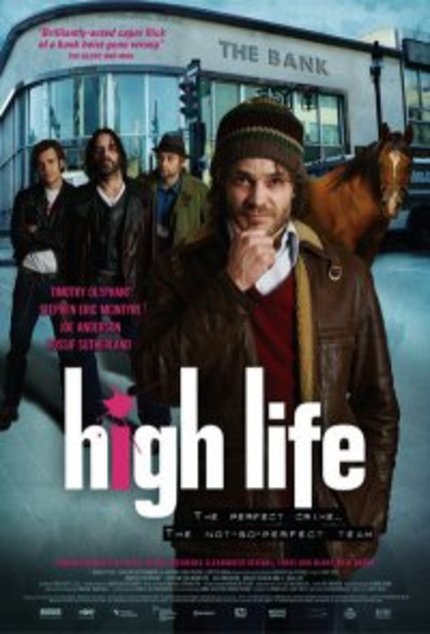 Based on the play of the same name, High Life is a smart, smart caper flick featuring not-so-bright criminals.  In 1983, finding a weakness in the procedures around the newly prolific Automatic Teller Machines, a group of mostly-ex-con junkies plan a "victimless" heist in which they hope to score tens of thousands of dollars.  Of course, when planned and executed by guys whose grasp of reality is near-constantly waylaid by a chemical cornucopia, is any plan perfect?  Dick (Timothy Olyphant, ranging far from Deadwood territory) is the mastermind, at least when he's not trying to steal his ex-wife's car or scrounge for a little more morphine.  His ex-cellmate Bug (Stephen Eric McIntyre in a strangely sensitive portrayal of a hot-headed killer) is willing to go along with Dick's plan, though he doesn't exactly work well with... anyone else, really.  Round out the gang with considerate pickpocket Donnie (Joe Anderson) and charmer Billy (Rossif Sutherland), and you have the coke-and-morphine-laced antithesis of Ocean's Eleven.

The real beauty of High Life is that it balances the intricacies and action of a slick heist film with the progressive character work that makes such a film more than just a fun exercise in plot logic.  The acting is - across the board - nuanced, whip-smart, and natural.  It's a remarkable accomplishment for a 20-day shoot, especially given that five of those days were scheduled without Olyphant, who had to accommodate a prior commitment.  Credit writer Lee MacDougall for adapting his own play for the screen in such a way as to suit the camera while still giving every single character of any significance the chance to screw with your expectations.  Many writers adapting from their own source can't mutate their work sufficiently for it to thrive in a new medium, but MacDougall can and has.

Likewise, one should note that this isn't director Gary Yates' first crack at theatre adapted for the screen.  His last feature, Niagara Motel (based on segments of George F. Walker's wicked collection of plays by the same name) often showed its roots, and not always to best effect, but Yates is in grand form here and guides High Life to a realization that is firmly cinema.  Lean, exciting cinema.