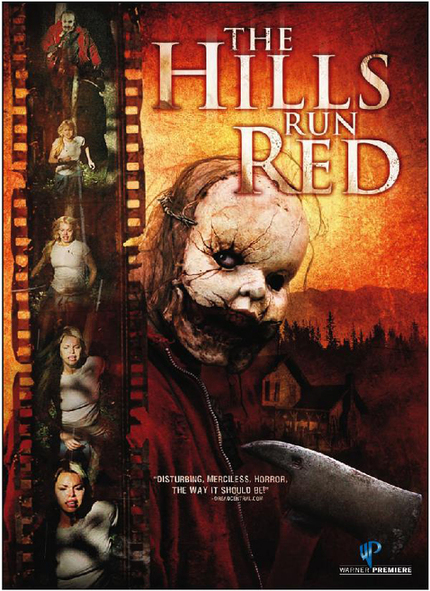 OK. I have started this damned review three or four times now, and it always gets away from me. I've always had a difficult time reviewing films I do not like. But it's even more difficult for me reviewing a movie I adore. And I'll fess up right here, right now. I love THE HILLS RUN RED.
Warts and all. THE HILLS RUN RED is director Dave Parker's second feature, his first being THE DEAD HATE THE LIVING, which I actually don't have a lot of love for. But damn, Parker has grown exponentially, improving so greatly between films that it's staggering. As where his debut was amateurish, the tension non-existant, and the FX laughable, THE HILLS RUN RED is a 180 degree turn around.

The story is a simple one. A young director, Tyler, obsessed with genre film is on a mission to track down a legendary and unreleased movie titled THE HILLS RUN RED, by a reclusive auteur, Concannon, who has pretty much dropped off the face of the earth. So Tyler searches out Concannon's daughter, finds her stripping in a bar between bouts of shooting dope. After getting her cleaned up, he enlists her help in finding her father, and the mythological film he shot, which apparently was too terrifying and disturbing to see an actual release. With Tyler's girlfriend and buddy in tow, they head, well, for the hills.
Running afoul of the obligatory countryside freakazoids, things go from bad to worse, when the group finds that THE HILLS RUN RED was never actually completed. That's where they come in. It looks like they are the final act, having gone from searching out the film to actually being in it. You can probably do the math as to what ensues, to write anything else would be to give away too much.

While THE HILLS RUN RED isn't blazingly original, that's not the point with this film. It's a flick for film geeks by film geeks, horror film geeks in particular. A lot of times, when a film is too self-referential or pandering to "that 70's/80's vibe", I'm usually coughing into my sleave by the end of the first reel. But in the case of THE HILLS RUN RED, all the tropes work. From the nerdy film obsessed leader of the pack, his in-it-for-the-ride girlfriend, the best friend/filmmaking partner, the cliche'd damaged goods stripper chick, to the backwoods nutjobs, and finally, the obligitory (and very effective) masked psycho-killer. It all works beautifully, and goes down as easy as comfort food. Which brings me to the hulking death machine known as Babyface. Wow. What a cool frickin' design, what an uber disturbing visage, this gargantuan and mutilated man in a decayed baby mask is truly scary. Babyface is a true succesor to the killers from the beloved horror franchises of the 80's. The chase and kill scenes are tense, well staged, believably acted, and just plain old-school fun. What could have been pilfering and imitative is now true homage. Technically, I really marvel at the film too. The lighting and cinematography are amazing. The direction is taught and keeps things moving at a brisk pace. The FX work is, in a word, wicked awesome. Even the look of the blood in the film, from it's color to it's viscosity, is cool looking. Also, another reason THE HILLS RUN RED works so well, is the screenplay was shepherded by non other than the absolutely stellar David J. SChow. An amazing author, journalist, and screenwriter, this guy just has "it". Whip smart, with an encyclopedic knowledge of the genre, and it's foundations, Schow turned cliche' into archetype. What would be cornball dialog with another writers voice becomes something more, somehow, when Schow is weilding the pen. The guy just kicks total ass, plain and simple. I've been a fan since lucking into his short story collection SEEING RED oh so many years back, then discovering his fiction and essays in the old publication TWILIGHT ZONE MAGAZINE. When I saw THE HILLS RUN RED I had forgotten he was involved, and kept asking myself "Why is this damned movie working so well? I shouldn't be loving it so much...???" then Schow's name popped up on the credits and bang! it all made so much sense. But, in the end, this is director Dave Parker's dark spawn of an offering, and boy oh boy does it deliver. Kind of a "sum is greater than it's parts" flick, as I said before, I love it warts and all. But movie making is no accident, and ringmaster Parker has orchestrated a visual symphony of blood that stands right next to my favorites of the slasher/gore genre. No mean feet, as I am so damned jaded to all that red stuff, after subjecting myself to every title that bore posters or box art promising carnage and mutilation back in my teen years. While THE HILLS RUN RED is nothing new, it doesn't try to be. It just wants to entertain, and take the viewer on a roller coaster ride, and one helluva ride it is.

Make some popcorn. Get a two liter of Mountain Due. Have a couple candy bars at the ready. THE HILLS RUN RED is a return to simpler times, when Saturday nights meant getting friends together, turning down the lights, and counting how many stylish whacks of the axe it takes to kill someone running through the woods.

After having this much fun, I am chomping at the bit to see what Parker does next. He could well be one of the next great genre directors. Go forth and kill Dave! Again...and again...and again!

As an extra cool aside, you'll see movie posters throughout the film that are for other non-existent genre flicks. These all come from a great book called SHOCK FESTIVAL by Stephen Romano, which depicts a fictional era of exploitation filmmaking, complete with pages and pages of mock-up posters for flicks we all wished actually existed. Pick it up. It's super duper cool (and may end up being a film itself, here's hoping!)

Lastly, go pick up THE HILLS RUN RED on dvd dammit, I want to see a sequel!  The extras include a commentary with director Parker, producer Robert Meyer Burnett, and screenwriter Schow, as well as the featurette, It's Not Red Until You Shoot It: The Making of The Hills Run Red.

Check out THE HILLS RUN RED trailer below, as well as the pitch film THE LUDIVICO TECHNIQUE.
Tweet Post Submit