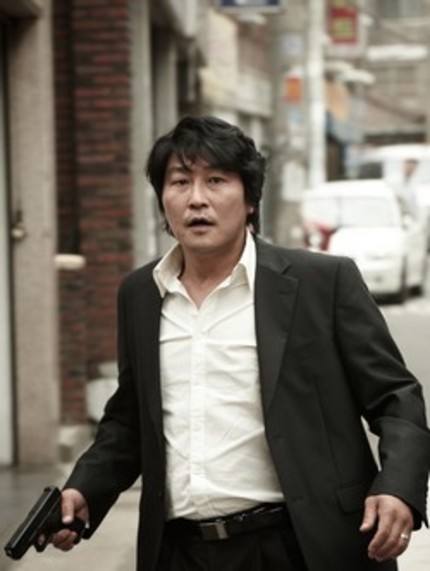 Im Pil-Sung, Jang Joon-Hwan and Na Hong-Jin might still hold the title of best debut directors of this decade, but a young up-and-comer who might fight his way up the Top 10 is certainly Jang Hoon, who helmed the excellent 영화는 영화다 (Rough Cut) in 2008. Produced by Kim Ki-Duk (whose career in this field is so far pretty impressive, much more so than anything he's directed since 2001, for instance), the film won stars So Ji-Seop and Kang Ji-Hwan a good number of awards at home and abroad, jump started "Director" Go Chang-Seok's career, and became one of the best films of last year, but Jang Hoon is still relatively unknown outside the boundaries of film geekdom.Yet, things could change with his upcoming 의형제 (Secret Reunion).

For starters, the cast. Song Kang-Ho needs no introduction and is a surefire draw, but if you consider that his co-lead Kang Dong-Won is starring in 전우치 (Woochi) and that the film is likely to draw huge numbers in December, by the time the film releases in February, the momentum could carry over to Secret Reunion and make it another big hit. Distributed by Showbox, Secret Reunion stars Song as a secret service agent who is pinkslipped after going after a North Korean spy (in the South to kill a traitor, who would be Kang) solo and failing, but when six year later said traitor reappears, the two team up to bring mutual benefit to each other: Song's Han-Gyu would catch the spy and get his credentials back, while Ji-Won would wash away the accusations which labeled him a traitor. Of course, things don't really go as smoothly as they planned. The interplay reminds a little of Jang's debut film, and it looks like Kang Dong-Won will continue choosing very promising projects like this, which can only do wonders for him as an actor. So it's February for this. Good little teaser waiting below.