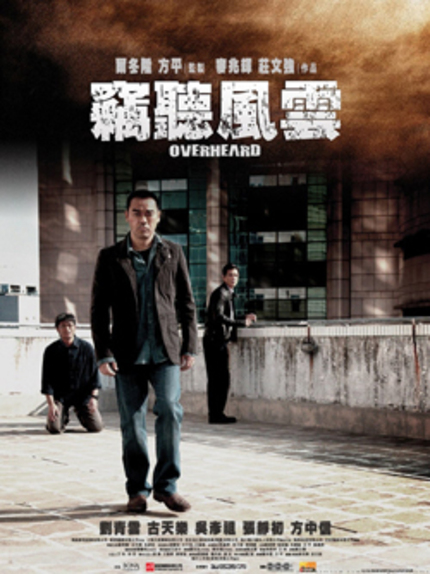 [The Reel Asian International Film Festival kicks off tomorrow night with the latest offering from acclaimed writers/directors Alan Mak and Felix Chong. The show starts at 7:00pm at The Bloor]

Overheard opens with three men breaking in to an office at night. They set up surveillance equipment, tap the phones and bug key rooms. Industrial espionage? Criminal activity? Yes and no. Johnny [Lau Ching-Wan] Gene [Louis Koo] and Max [Daniel Wu] are officers with the CIB: Criminal investigations bureau. They are part of the surveillance team set up to listen in on their suspect and find incriminating evidence. Suddenly, one of the suspects in their investigation enters the office. What follows is a tense moment smartly played out by writers/directors Alan Mak and Felix Chong, the duo who stormed on to the international stage with their Infernal Affairs trilogy, marking them as rising masters of the crime genre. Overheard is a noble attempt at continuing that trend yet the sincerity behind their effort and their belief that financial corruption, though timely, makes for an interesting topic passes as entertaining though it will not be as memorable as their previous work.

Everyone has secrets and they are even harder to keep when it is your job to uncover secrets. Our trio happen learn on the job that two officers in one of the other units are having an affair. Gene is always strapped for cash. He is a family man whose son is very sick, likely leukemia, and he needs injections to stop nose bleeds and gets cat scans with his father. Turns out that Gene is also sick and the prognosis is that he only has one year left to live; though he hides this from everyone. So he wants to take care of his family before he is gone. Max is marrying into a wealthy family and receives expensive engagement presents from his fiancé. His future father in law is putting pressure on Max to quit the police force once he is married so he can get a better paying job to care for his wife. Johnny has rekindled a relationship with a former lover who was married to one of his colleagues on the surveillance team but is now going through a divorce.

The story gains momentum when one night while everyone else is outside Gene and Max overhear [get it?] a conversation between their suspect and his secretary. The following day the company E&T's stock is going to rise dramatically. Gene begs Max to erase the transcript and keep this information to themselves and make some money on the stock market. Why should the bad guys be the only ones to profit from the stock market? Gene convinces Max to take this information and buy stock into the same company these questionable shareholders do. Johnny is ever observant and suspects something is up when everyone enters the room. He goes to stop them on trading day but it is too late; Max has already invested. Though Johnny doesn't like what is about to happen to members of his team he turns a blind eye. But trading is suspended when the dramatic rise catches the interest of Securities and Futures Commission. Soon, everyone's attention on this particular stock. As the situation for the company E&T worsens and the investigation starts orders are given from the corrupt businessman behind this scandal, Will Ma, played to hideous excess by Michael Wong, to take out the major stock holder in the company. The trio only knows about this listening in on a channel only they know they've set up. A life is at stake. While Gene and Max argue that these traders are scum Johnny reminds them that they are still policemen. The unity of the team in threatened. Johnny is the closest thing to a moral center and core of this trio so they agree to go help. The more they get involved with Will Ma and his goons the deeper in trouble they will find themselves.

There is no doubt when watching Overheard that Mak and Chong are technically superb filmmakers. They establish beautiful city shots and backdrops like the Stonecutters bridge tower in the ozone behind our regular Joes just trying to catch a break [is being a cop in Hong Kong really so bad you'd have to resort to this?]. They also utilize lots of great cranework amongst the rooftops on Hong Kong and create some truly dizzying shots. And though my doubts that a timely thriller about financial corruption could be exciting were sort of confirmed when Mak and Chong take the story outside of stock and bonds that is where they really shine. It is rather silly when it comes to the trading bits. The Michael Bay spinning-around shots, dramatic music swells and Daniel Wu standing on top of a desk urging the stock like a thoroughbred racehorse just don't have the intended effect of excitement, rather amusement. But, when Mak and Chong turn Overheard loose in the third act, as the ramifications of this trio's involvement with the trading scandal start to get dire and deadly, this is where they shine. Is it an absolute pay off? Not entirely. Overheard is not a masterpiece but it still manages to entertain and surprise at points and will be better than most crime films coming out of Hong Kong.

Credit is due to Lau Ching-Wan, Louis Koo and Daniel Wu. They are rather good in their roles. Zhang Jingchu, who plays Johnny's love interest Mandy, has a small role but she is simply luminescent whenever she is on screen. Michael Wong and his 'turn it up to 11' acting is the only blemish but that is to be expected from him. Wong goes all in or not at all. However, at one point in the film he does scream like a little girl. That alone is worth the price of admission. Come for the screaming. Stay for technically gifted filmmakers.
Tweet Post Submit