A Bruce A Day: THE WAY OF THE DRAGON 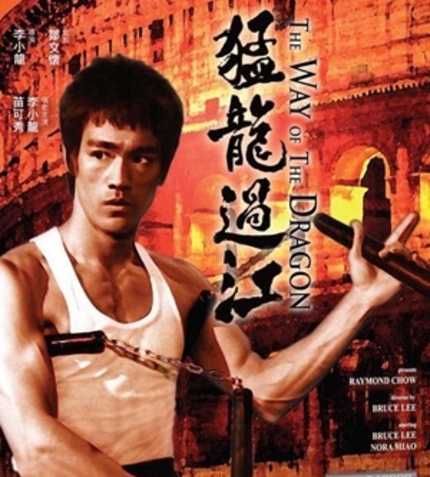 The most playful film in his canon by far, The Way of the Dragon is also arguably the truest image of how Bruce Lee wanted to be seen by his fans.  Beginning more as a comedy than an action picture - the first fight does not arrive until just past the half hour mark - The Way Of The Dragon does not just star Lee but was also written and directed by him.  And, that being the case, while Way will never compete with Lee's other Dragon film for overall fan appeal it is, nonetheless, absolutely required viewing for fans.

Lee stars as Tang Lung, a country boy raised on a farm in Hong Kong's New Territories, a young man who spends his days on the farm practicing martial arts.  And so it is culture shock in more ways than one when he is sent off to Rome - not just a big city but a big European city - to help a family friend with a brewing problem.

You see the lovely young Miss Chen has just inherited a restaurant in the heart of Rome and her restaurant occupies some prime real estate long after by a local group of mobsters.  Things haven't gotten too ugly just yet but the thugs have spent weeks frightening away potential customers in a bid to bankrupt the business and force a sale.  Frightened of where things are going and determined not to sell, Miss Chen has called home for help.  Tang Lung is the answer to that call.

At first Chen can't see what help Tang Lung could possibly be.  He is shy and completely out of his element.  He speaks nothing but Chinese and knows nothing of western culture.  He's cute, sure, but what help can he be in Rome?  And so The Way of the Dragon begins - surprisingly - as a swinging seventies culture clash romantic comedy.  The first half hour is European eye candy - both scenic and of other varieties - language gags and the sort of boy-girl frustration that always leads to the couple at the core getting together.  It's a chance for Lee to show himself off as something other than just a fighter, an aspect to his persona that he obviously felt quite important.

But not to worry: the fighting hasn't been forgotten.  When the direct confrontation between Tang Lung and the gangsters begins it begins with a rapid flurry of fists and feet before escalating rapidly as guns come in to play and Lee breaks out his trademark nunchuks and groin hits all accompanied by his trademark whoops and hollers.  But even here - in the early going, at least - the comedy element remains with Lee giving at least one very deliberate nod to the Three Stooges in mid fight.  The early fights have a sense of playfulness to them, with the most serious elements being the occasional explanation of Lee's philosophy of martial arts.

But the playfulness disappears before too long.  Tang Lung, you see, is too much for the locals to handle and when they finally realize this they call for outside help, flying a champion martial artist in from the United States to take care of him.  And thus we get the famous - and deadly serious - to the death battle between Bruce Lee and a young Chuck Norris shot on location in the Colisseum.

Taken back to back with the serious drama of Fist of Legend it is clear here that Lee was trying to prove himself as something more than just a fabulously skilled fighter.  Yes, the fighting would always be the base of Lee's appeal - a fact he seemed to embrace fully - but he also wanted to deliver a message that he was capable of more.  If Fist of Legend demonstrated his dramatic chops then The Way of the Dragon was to do the same for his comedic skills.

A not eon the video quality on this one.  Again, I am not a huge AV buff, so am not the best qualified to go in to specifics but while the first two of Lee's films remastered on BluRay perform quite well to my eyes, there are MAJOR flaws in the first ten minutes of the BluRay edition of The Way of the Dragon.  Happily they clear up quickly but there is an extended stretch - all within Lee's arrival sequence at the airport - that is simply atrocious.  I refuse to believe that this was shot out of focus which means either there was a major flaw in the mastering process itself or the source material has since been damaged but there are scenes here that are not even up to DVD standards - never mind BluRay - and looks as if they could have been mastered off of a second or third generation VHS tape.  Soft doesn't even begin to describe these scenes.  Again, it clears up quickly and everything after the ten minute mark is perfectly acceptable but those first ten minutes are harsh.
Tweet Post Submit