A Bruce A Day: FIST OF FURY 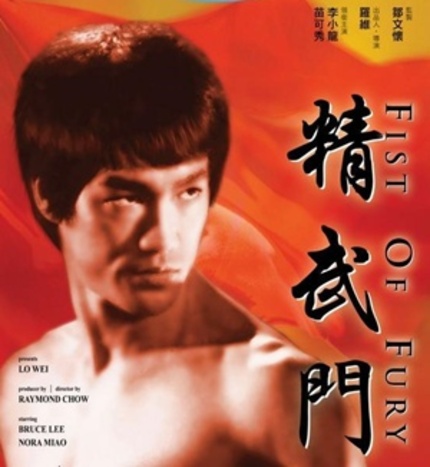 [We continue our A Bruce A Day run through the career of Bruce Lee with his sophomore starring role in Fist Of Fury.]

Just a year after making his leading man debut with The Big Boss Bruce Lee would reunite with director Lo Wei to tackle one of China's most popular folk heroes, Chen Zhen, in Fist of Fury.  The favored student of legendary martial arts master Huo Yuan-Jia, the story of Chen's return to Shanghai on the death of his master and subsequent clash with the Japanese occupying forces is a favored rallying point for Chinese patriotic pride and one that has been told many times with this film and later Jet Li star vehicle Fist of Legend being the most high profile examples.

The most drama and character oriented of all Lee's films, this is the one occasion in his big screen career where Lee was asked to step in to an already existing - and very popular character - rather than creating a new character from scratch.  As a result, while Lee's portrayal of Chen Zhen certainly carries some of the typical Lee trademarks - the nunchuks and the bizarre whooping sounds he favored while fighting - Fist of Fury is the film that allows the least amount of Lee's own personality to come through.  It also - somewhat bizarrely for a film telling the story of a famous martial artist - features the least amount of screen fighting of all of Lee's films.

The core story is quite simple.  The young, hot headed Chen Zhen has been pursuing his studies away from Shanghai only to rush back when he receives word that his beloved master has died.  It is the early in the century and Shanghai is under Japanese occupation and the Japanese, having been previously shamed in public by master Huo, waste no time in interrupting and disrespected the master's funeral.

What is a loyal student to do?  Chen respects his elder's wishes at the funeral itself and refrains from immediately answering the Japanese insult but as soon as he can get away the young hot head goes straight to the Japanese dojo and lays a beating on the entire Japanese contingent.  A personally satisfying move, yes, but not a particularly wise one as the controlling Japanese now have the leverage to demand Chen's turnover - a move that will certainly lead to his death - or the complete shutdown of Huo's school and arrest of all its members.  And when Chen learns that the Japanese were behind the death of his master ... well, the groundwork has been laid for an epic confrontation.

Unfortunately Fist of Fury never makes it up to the epic level promised by the premise.  Lee has only two significant martial arts sequences in the entire film - though both are quite long and feature multiple opponents - and many of the story elements are handled clumsily by director Lo.  In many ways Fist of Fury suffers by comparison to Jet Li's Fist of Legend - a superior film in terms both of the quantity of martial arts work and dramatic elements.

But where Fist of Fury stands out is, unsurprisingly, the sheer power of Lee himself.  Though he doesn't have as many chances to strut his stuff as viewers may want he certainly makes the most of what he's got.  And, once again, it is impossible not to be struck by just how unique Lee really was in the martial arts world.  There's a ferocity to his work that is just lacking from the work of other stars, both of that era and since.  Once again Lee operates with a sort of hard edged brutality.  Unlike other classic fighters who kill only when necessary, Lee is more than willing to dispatch an enemy to reach his goals.  Take the Fist of Fury versus Fist of Legend comparison one more time.  The only opponent to die by Chen Zhen's hand in Legend is the final villain himself and that only when he refuses to stay down when beaten.  The villain essentially dies because of his own treachery and Chen orchestrates a faked death for himself so that he can retire off in the country to lead a quiet life.  In Fury, however, Chen kills four men just to get to the final villain who he also puts down as directly and brutally as possible.  And then Chen himself embraces his own death by Japanese hands in a final act of defiance.

And this, I think, is part of the lasting allure of Lee.  It's not just that he was a spectacular martial artist - which he surely was - but that he embraced his skills in the way that most of his viewers would themselves.  What's the point of training to be a fighter if not to fight, after all?  Who has escapist fantasies about meditation?  Lee worked his entire life to be the greatest there ever was at kicking ass and, dammit, asses were going to be kicked.  And so even his more minor titles have a lasting power that makes them deserving classics.
Tweet Post Submit