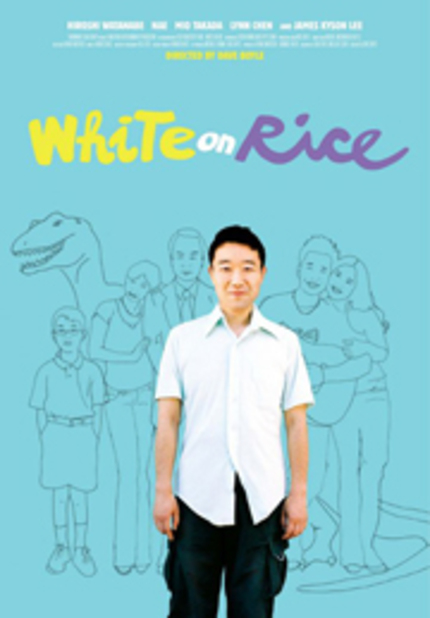 White on Rice is a comedy about Jimmy (Hiroshi Watanabe), a naive but adorable 40-year-old divorcée who moves to America to stay with his sister Aiko (Nae). His disgruntled brother-in-law, Tak (Mio Takada), isn't happy about the situation, but Jimmy's new bunkmate--his 10-year-old nephew, Bob--provides some wise advice and moral support. Jimmy loves dinosaurs and geology, his lifetime achievements include being an extra in a samurai movie, and his goal is simply to find a new wife, someone better than his ex-wife. When he falls desperately in love with Ramona (Lynn Chen), who is Tak's niece and the girlfriend of co-worker Tim (James Kyson Lee), things begin to go horribly wrong. Vowing to win her love, Jimmy tries a series of clumsy romance tactics that eventually backfire on him and compromise his family's well-being. ReelAsian
White on Rice has an excellent cast from top to bottom. Lead by Watanabe his Jimmy is this bundle of clumsy, awkward, goofy, adorable and someone a lot of guys completely relate to. Tell me there isn't a guy out that hasn't done anything like Jimmy has when in the presence of a beautiful woman like Lynn Chen. He is driven by his heart and not his head, that is for sure. He is anchored by his all-together sister Aiko and frustrated brother-in-law Tak. She's a flower designer who loves her family and wishes just a little of those first years when she met her husband. He's an executive who also yearns to reach back out to his family. We get wonderful performances out of both Nai and Takada. The silent moral center of this family relationship is their son Bob. Newcomer Justin Kwong does very well in light of such great talent. The most recognizable face in the cast is James Kyson Lee from Heroes. His role as Tim gives us a lot of the great comedy moments with Jimmy even though he turns out to be Jimmy's nemesis, but probably doesn't know it.

White on Rice hits every comedic note with perfect pitch with a humor that transcends culture. This can be any family in America. Where other recent Asian American comedy films have perhaps tried too hard to make their comedy ethnic centric White on Rice doesn't concern itself with who it's audience is. Dave Boyle and Joel Clark have written a script that is complete with laughs and heart. It is not often that I get to say that a film is really, really laugh out loud funny. It is a definite crowd-pleaser. Completely funny and incredibly charming it belongs in the ranks of great small American comedy films.

Do not miss this.

More about White on Rice