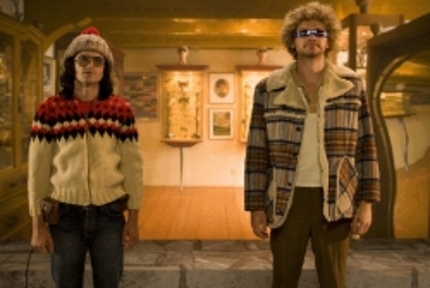 Paul King's Bunny & The Bull is a film that doesn't seem to be quite certain what it wants to be.  Is it a quirky, Gondry-esque comedy?  Is it a human tragedy?  Or some sort of fusion of the two?  It never quite settles on any option and so becomes just slightly less than any of them, which is a shame because King and his talented cast obviously have talent to burn and had that talent been clearly focused on a single path this film could very likely have been one of the strongest debuts to come on the scene for quite some time.  As it is, instead of greatness, it'll have to settle for being rather good.

Edward Hogg is Stephen, a young man who has not left his flat in a year.  A fear of the outside world has led him to lock in to an extremely regimented routine, every day exactly the same with no variance tolerated.  But life is neither predictable nor controllable and when a rodent infestation breaks his routine Stephen's entire system crumbles and he finds himself reliving the road trip he took with his friend Bunny (Simon Farnaby) the year previously, the road trip that ended with Stephen's self-imposed life of seclusion.

Now here's the trick: While Stephen's mind sets about reconstructing and playing back Stephen's memories of that trip, it uses whatever lies to hand to do so - the settings and props of the trip reconstructed within Stephen's fragile psyche using whatever happens to be close to hand in the real world.  Paper drawings, clay models, cardboard boxes, random gears, everything is grist for the mill to create a wildly colorful, playful tour through Stephen's life.  That hands-on, make it out of anything approach will surely invite deserved comparisons to the films of Michel Gondry and, indeed, fans of the Frenchman will find plenty to love here as well.

The entire cast of the film is strong, writer-director King augmenting the core duo of Hogg and Farnaby with UK cult comics Richard Aoyade, Noel Fielding and Julian Barnett - the latter two of Might Boosh fame, King having directed Boosh prior to this - and perhaps its their presence that leads to some of the problems in the film.  It's not that they're not good - all three are - but their presence inspires certain, largely false expectations as to what the film as a whole is and when they do get the chance to stretch their comic legs - Barnett has a hysterical scene involving dog milk - those individual moments seem to belong to some other picture.

King wrestles with just how funny a film about tragedy should really be and he never quite finds the answer.  He presents Stephen's life in one way - look at the funny compulsive man! - before the core story pulls it in another direction and inserts odd little asides whenever the going seems to be getting too serious, a decision that may work in moments but does little for the film as a whole other than to create these weird tonal gaps that make it a little difficult to give either the comedy or drama full credence.

But, that said, Bunny & The Bull is a wildly creative piece of work, one that charms with both its visual style and the authentic, if bumpy friendship, between this incredibly mismatched pair and Bunny's determination to show Stephen a good time.  The flaws are significant but not enough to overwhelm the positives, not by a long shot,

Bunny and the Bull