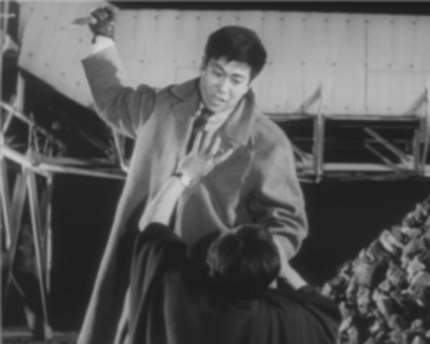 Tachibana (Yujiro Ishihara), Terada (Akira Kobayashi), and Shimbara (Joe Shishido) are hoods who had shady dealings with a local gangster named Katsumata (Naoki Sugiura) in the past. Years after the trio go "clean," the police and the district attorney try to nail Katsumata for an assault with the hopes of pinning numerous other crimes on him. The authorities can't get enough evidence to lock him away until Shimabara contacts the district attorney with secret info tying Katsumata to a murder. Once Shimbara squeals, trouble comes looking for the trio of cons.

Yujiro Ishihara is good as a hang-dog loser who can't get over his past, and he plays really well against Akira Kobayashi. Joe Shishido's role is minor, but his character is key to the development of story. Rusty Knife's main themes are betrayal, loneliness, and regret, and the film has an appropriately down-beat tone. Characters are rendered in shades of moral gray, and the shading grows darker as the story progresses. Scenes often occur in small, dimly lit spaces like bedrooms, basements, bars, alleyways with either one to three actors proportionately spaced within the frame or lots of actors crowded together in tight spaces.  A boozy, burned-out theme song (performed by Yujiro Ishihara) captures the overall mood: "My only companion/My rusty jackknife/I came all the way/To cry for you/I always end up here/At the end of the road." That is hardboiled.

The final film to be reviewed from the Nikkatsu Noir box set is the earliest title: Koreyoshi Kurahara's I am Waiting from 1957.