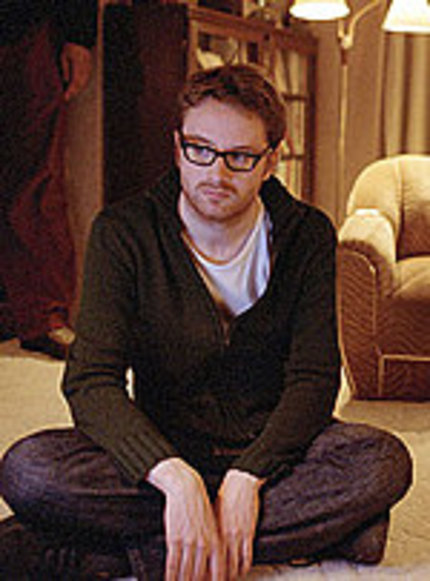 Here are our winners for BAMcinematek's Nicholas Winding Refn retrospective. Congrats to Max Feld and Josh Townsend for getting their numbers picked. They both win a pair of tickets to their choice of Refn's BLEEDER, GAMBLER or FEAR X.


Once again the fine folks at BAMcinematek in Brooklyn are putting on another retrospective, and this time its for big time ScreenAnarchy favorite, Danish director, Nicholas Winding Refn!

To celebrate we're giving away two pairs of tickets to either BLEEDER, GAMBLER or FEAR X. And take note Refn will be in attendance for the sneak peek of BRONSON and after the PUSHER trilogy marathon. To enter all you have to do is e-mail me here under the subject BAM! with your name by Thursday September 24th.
- and yes, the possible irony of that headline and photo combo is not lost on me -

What follows is BAM's press release and schedule:

One-day revival of The Pusher Trilogy on October 3

Brooklyn, September 9, 2009- From October 1-4, BAMcinématek, the repertory film program at BAM Rose Cinemas, presents Blood on His Hands:Nicolas Winding Refn, the first New York retrospective of the Danish director. One of Denmark's most innovative filmmakers, Refn creates riveting tales criminals, ne'er-do-wells, and low-lifes with an astonishing commitment to character. The result is a filmography that is not only brutally violent, but also powerfully moving.

Director, producer, and screenwriter Nicolas Winding Refn was born in Copenhagen in 1970. He lived in New York during the 1980s and early 1990s, and studied acting at the American Academy of Dramatic Art. He was accepted to study at the Danish Film Institute, but chose to continue working on his first feature, 1996's Pusher. This gritty, low-budget portrayal of the Copenhagen underworld from the perspective of a drug dealer on the street found huge success in Denmark and abroad. It launched both Refn's directing career and the acting careers of key Danish actors including Mads Mikkelsen.

Refn followed up with Bleeder (1997) before directing his first English-language film Fear X (2003), starring John Turturro. While garnering critical acclaim, Fear X left Refn and his production company
deeply in debt. This served as the catalyst to return the write and direct two more films in The Pusher Trilogy-Pusher II: With Blood on My Hands (2003) and Pusher III: I'm the Angel of Death (2005)-in hopes of making money quickly. His experience during this time is captured in the documentary Gambler (2003) by Phie Ambo. The Pusher Trilogy, which features supporting characters from the original film as protagonists, became a cult phenomenon. Refn's next film, the controversial Bronson (2008), a portrait of the UK's most notorious prisoner starring newcomer Tom Hardy, received its New York premiere during BAMcinemaFEST. Refn's Viking saga Valhalla Rising (2009), starring Mikkelsen, is currently playing on the festival circuit.

John Turturro gives a subtle, enigmatic performance as a mall security guard investigating the seemingly-random double murder of his wife and a police officer. Calibrated to unnerve at every turn, Refn's first English-language feature ranks mines suburban Midwestern landscapes for hints of danger in a manner reminiscent of David Lynch.

Friday, October 2 at 4:30, 9:40pm
Gambler (2006), 78min, in Danish with English subtitles
Directed by Phie Ambo
This documentary follows Refn closely during and after the filming of the two Pusher sequels as he juggles the productions, money troubles, a new baby, and problems with his girlfriend. This extraordinary insight into Refn's career, ideas, and process will be of interest to anyone who follows independent filmmaking.

Refn overturns the overly-sanitized biopic formula with this stylized portrait of Britain's most notorious prisoner: a former bare-knuckle boxer who has spent over 34 years behind bars, including three decades in solitary confinement. Tom Hardy inhabits Bronson utterly, from the formidable physical details to the persona of a man who is polite and vulnerable, yet brutal and sadistic.
*A Q&A with director Nicolas Winding Refn will follow this screening,

At 4pm*
Pusher (1996), 105min, in Danish with English subtitles.
With Kim Bodnia
"It begins in free-form, faux-vérité mode, but as Frank's predicament becomes more dire, the narrative tightens like a noose, culminating in a sequence of events that's perversely exhilarating in its precision, lucidity, and understatement." -The Village Voice


At 7pm*
Pusher II: With Blood on His Hands (2004), 100min, in Danish with English subtitles
With Mads Mikkelsen
"...the interesting thing about this sequel to his impressive 1996 debut is what's going on behind the eyes of dopey lead character Tonny... Mikkelsen puts in a skilfully taciturn performance, while Refn's direction is no less controlled." -Time Out London

Refn perfects his dynamic, confident visual style in this second entry, his trademark attention to character evident in a script served well by the versatile Mikkelsen. Newly released from prison, small-time hood Tonny attempts to connect with family and friends, only to start a vicious downward spiral that escalates in intensity from scene to scene.
*An introduction by director Nicolas Winding Refn will precede this screening

At 9:15pm
Pusher III: I'm the Angel of Death (2005), 90min, in Danish with English subtitles
With Zlatko Buric
"Though entire cast is terrific, pic belongs to Buric as the sad-sack Milo, a career criminal so weary of the game that he seems to be dealing with his nonstop crises by reflex alone." -Variety

Once again throwing its protagonist into an extreme situation and watching him fight to survive, the third film unfolds over a twenty-four-hour period giving it a structure similar to theatrical tragedy. Claustrophobic camera-work tracks Serbian drug lord Milo (Buric)'s frantic rush between dope deals, AA meetings, and preparations for his daughter's birthday party, until unpredictable events threaten to ruin everything.

Refn's rarely-screened sophomore feature finds Leo (Bodnia) frustrated by a dead-end job and an unwanted pregnancy. To avoid his girlfriend, he regularly stays out late with his buddies until he witnesses an act of violence that pushes him over the edge. Eschewing the glamorous mobsters and uber-cool thieves of most crime films, Refn brings great sensitivity to this story of disenfranchised characters and petty criminals in desperate circumstances.

BAM Rose Cinemas "offers one of the most civilized movie-going experiences in the city."
-The New York Times

The four-screen BAM Rose Cinemas (BRC) opened in 1998 to offer Brooklyn audiences alternative and independent films that might not play in the borough otherwise, making BAM the only performing arts center in the country with two mainstage theaters and a multiplex cinema. In July of 1999, beginning with a series celebrating the work of Spike Lee, BAMcinématek was born as Brooklyn's only daily year-round repertory film program. BAMcinématek presents new and rarely seen contemporary films, classics from cinema history, work by local artists, and festivals of films from around the world, often with special appearances by directors, actors, and other guests.

Now in its 10th year, BAMcinématek has not only presented major retrospectives by well-known filmmakers such as Michelangelo Antonioni, Shohei Imamura, Manoel de Oliveira, and Luchino Visconti, but it has also introduced New York audiences to contemporary artists such as Pedro Costa and Apichatpong Weerasethakul. In addition BAMcinématek programmed the first U.S. retrospective of directors Nuri Bilge Ceylan, Arnaud Desplechin, and Hong Sang-soo. Recently BAMcinématek co-curated a three year summer collaboration of new feature/documentary/short films with the Sundance Institute, 2006-2008.

Do you feel this content is inappropriate or infringes upon your rights? Click here to report it, or see our DMCA policy.
Nicolas Winding RefnBrock Norman BrockTom HardyKelly AdamsLuing AndrewsKaty BarkerActionBiographyCrime