FOUNDING OF A REPUBLIC Review 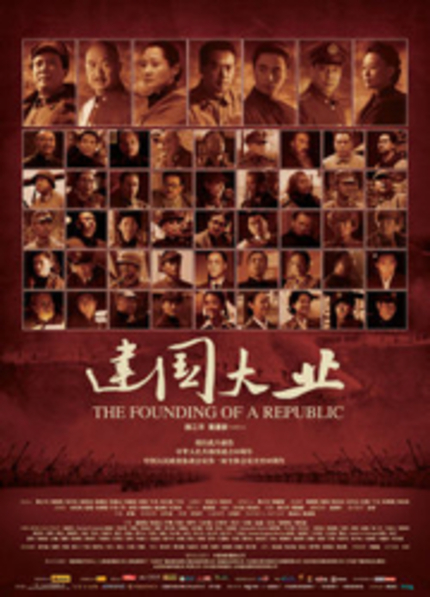 It should probably be stated right from the outset, I'm not Chinese. Sure, I've been living in Hong Kong for the best part of a decade but I'm not especially well-versed in Chinese history and as the Mainland prepares to dwarf last year's Olympics outburst of National Pride with monumental celebrations to commemorate 60 years of "liberation", I'm really not bothered either way.

FOUNDING OF A REPUBLIC, however, has been made for the sole purpose of celebrating the glorious rise to power of Mao Zedong and his Communist Party of China. It begins in 1945 with the dust still settling after World War II and chronicles the next four years up to Chiang Kai Shek high-tailing it to Taiwan and the formation of the People's Republic of China. What happens in between...now that's a damn good question.

Right from the opening scene, the screen is constantly flashing up the names, rank and relevant governmental position of every major character as they appear. I was often caught having to make snap decisions whether to read these introductions and miss the subtitles, or follow the conversation, hoping I could ascertain who I was watching later on. The film is basically two hours of conversations, heavy on political rhetoric, while light on drama or emotional engagement. As the various parties shift their loyalties and bicker over whether to stay loyal to Chiang or support Mao and his promises of democracy, there is apparently a huge civil war in progress. But the filmmakers - and there are five different directors credited, including "guest directors" Chen Kaige, Peter Chan and Feng Xiaogang - choose not to show the audience this. After all, in a film celebrating the unification of China, who wants to watch the country's people killing each other?

Well, quite frankly, I do. A bit of political debate is fine to give the film a sense of historical authenticity, but cinematic spectacle should eventually win out. But it doesn't, save for a few sweeping shots of planes bombing villages and the People's Liberation Army marching largely uncontested southwards. It is also intercut with real stock footage of various key events along the way, to further stoke the fires of nostalgia.

The film assumes its audience knows this period of history inside out, and it is probably right to do so. This is being made solely for a domestic audience to celebrate a much-treasured turning point in their country's evolution, after all. And that's absolutely fine. The majority of outsiders watching this film, however, will struggle to keep up with what's going on, or quite frankly, to stay interested. Two hours of people talking politics in smoky rooms gets very boring, regardless of where they are from or which country's fate is at stake, and sadly, the film amounts to little more than that.

The lead roles are played by television actors, who while fairly good in their roles, won't be familiar to anybody not au fait with Chinese drama serials. As for the much-advertised cameos by Chinese superstars - yes it is absolutely true. Jet Li pops up for a line or two at the beginning, as does Leon Lai and Jackie Chan is almost unrecognizable behind glasses and bad facial hair. But most of the current A-list appear as a last-gasp flurry in the film's closing minutes and many stars reported to be involved are nowhere to be seen. Donnie Yen, Zhao Wei, Jackie Cheung and Zhang Ziyi all help Chairman Mao pick out a new flag and choose a national anthem for his new Republic, while Andy Lau is on hand to help Chiang Kai Shek flight into exile. But I struggled to see Chow Yun Fat, Stephen Chow or Tony Leung Ka Fai anywhere. It all smacks of sensationalist stunt casting, because it is. Apparently many of them appeared for free, but at the end of the day it's all for love of country and they add nothing to the film.

Sadly, FOUNDING OF A REPUBLIC isn't really much of a film. The script is quite clearly the carefully assembled construct of numerous boards, committees and sub-committees vigilantly ensuring that nothing remotely negative gets anywhere close to the screen. What we do get is a simple re-enactment of exactly what the Chinese Communist Party wished had happened, for the reasons it wished they had happened and with the response it wished it had received. At numerous points during the screening I half expected Eli Roth to burst in wearing a tuxedo and machinegun us all to death. But then I remembered - that wasn't real history, that was just a wish fulfillment fantasy. Silly me!