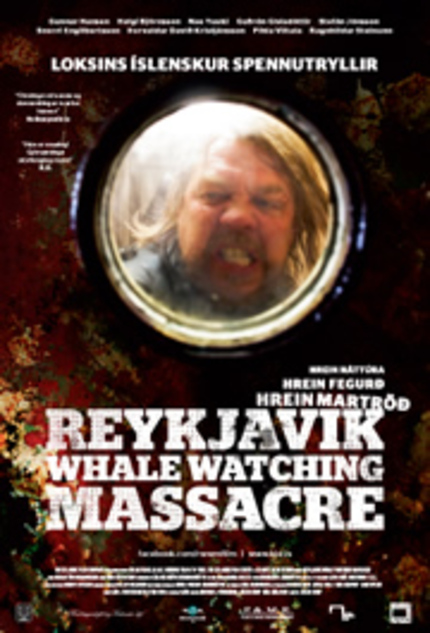 Iceland has been in the news for all the wrong reasons lately, but their film industry is being watched with increasing interest from all over the globe. Films like "Jar City" and "Higher Force" have made people sit up and notice, and a filmfest doesn't seem to be complete unless there is a film from Iceland in its catalogue. If this keeps up we might have to create a separate tag for Iceland, as it technically is not part of "Continental Europe" nor part of "Russia"... but I digress.

So one minute I'm talking to a loyal ScreenAnarchy reader, the next he mentions he's seen "Reykjavík Whale Watching Massacre" ...

We've been waiting for news on that one, and after some coercing he was kind enough to write a review for us.

So say hello to Kristján. Did he like what he saw?

The stage is yours, Kristján!

Hi, I'm Kristján and I am as you might say a longtime reader but firstttime contributor of ScreenAnarchy. This is my review for "Reykjavík Whale Watching Massacre" (which I shall call RWWM from now on).

It was with some mix of hopefulness and dread that I went to see the latest opus from director Julius Kemp and Iceland's first straight up horror film, even though the filmmakers are trying their best not to call it that. This is Kemp's first film as a director for 15 years and he's been acting as a producer since then, producing the local mega hit "Astropia" most recently.

As a huge horror fan I was excited to see if us Icelanders could pull off the same quality product that our Scandinavian brethren have been creating over the past few years with great success but I was also worried because of Kemp's track record as a director, his other two films are local legends of bad movie making.

While technically RWWM isn't Iceland's first horror film, we have "The House" and "Ghost story" in our meeker genre catalog from the 80's, it is the first one to go the exploitation route and clearly wears its inspiration on its sleeve.

The story is basically "The Texas Chainsaw Massacre" on a boat. A group of tourists on a whale watching trip get stranded on their boat when the captain dies in a freak accident and the rapist first mate hightails it, leaving them on their own.
Coming to their rescue is a shady looking man (Helgi Björnsson) who instead of taking them to shore takes them to his derelict whaler where his mother and mentally challenged brother live.
On board they are almost immediately attacked by the crazed family and what follows is what seems to be a random series of scenes of different characters trying to save themselves and the family tormenting those they've caught.
And that's the plot really. Simple and done a million times before with various levels of success. So it should be fairly easy to make an entertaining horror film out of the material they have at hand. So how come they completely fuck it up in every way?

First the good things.
On a technical level the film is pretty well made, shot decently by Finnish cinematographer Jean Noel Mustonen, the FX, the few that are featured are cheap but effective in the gore department and there is one pretty clever decapitation scene near the end.
The ship's setting looks good but not used well enough to make an proper impact.
The principal actors playing the murderous family all handle their jobs well, especially Stefan Jonsson as the mentally challenged religious sex freak who is just really disgusting. Helgi Björnsson is menacing and effective but doesn't really get the opportunity to do anything other than chase down victims. Gudrun Gisladottir as the mother has little to do other than growl and make faces but she does it well.
And that's it really.

Then the bad.
First and foremost the writing by Sjon (frequent Bjork collaborator, author and Academy Award nominated songwriter). I don't know what the hell he was thinking when he wrote this.

1: The story set up doesn't make sense. They make it look like the trip is a set up by the family, using a retarded guy who is an obvious nod to TCM's Hitchhiker character, even sporting the same facial expression, but everything that brings the tourists to their ship happened by complete coincidence.

2: Characters are either complete assholes or racist stereotype assholes (we have the camera nut Japanese tourist saying "So solly" and an obnoxious French tourist who actually says "Oolala") and none of their actions make any sense what so ever (I'm sure that many women would pick up a microphone and sing "It's Oh So Quiet" after being nearly raped and a person has died).

Then there's the lack of a main character. At first you think it's Pihla Viitala's character Annette, that's the one you start out following but then she sort of falls out of the picture and we end up following Miranda Hennessy and Terence Anderson. There is also the bizarre character played by Nae Yuki who is goes completely unexplained in her action and you have no idea what the fuck is going on with her.
And it's bad enough that the characters are one dimensional and unsympathetic in every way but the actors handling them are just god awful. I don't know if these people are bad actors in general or that Kemp doesn't know how to direct them but something went wrong in this department.
The filmmakers have been busy promoting that Gunnar (Leatherface) Hansen is in the film as a further nod to TCM but it was a shame to see him poorly dubbed to make it look like he spoke Icelandic. I don't know if people who have never heard Gunnar's real voice noticed but it bugged the hell out of me. Hansen doesn't speak a word of Icelandic so I understand why they did it but it looked so obvious in those scenes.

I shouldn't be surprised that this film failed on almost every level, given the filmmakers previous work and I have to lay the blame on Kemp who should stick with producing films and have more competent directors handle the actual filmmaking.

I was maybe too hopeful that Iceland could at least dip its toes in to the murky waters of Euro horror but this time it slipped, banged its head on the bank and drowned.